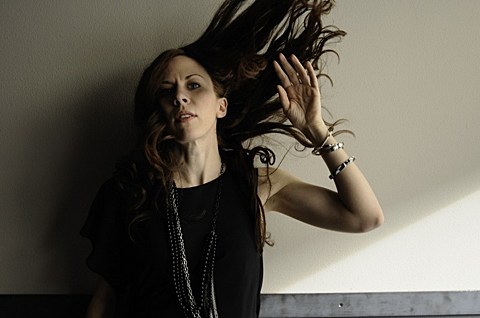 Brooklyn composer/pianist Missy Mazzoli, who's responsible for the 2012 opera Song from the Uproar (among other works), is releasing a new album with her ensemble Victoire, Wilco drummer Glenn Kotche, and three of the Roomful of Teeth vocalists (who she's worked with before) called Vespers for a New Dark Age on March 31 via New Amsterdam Records. Vespers for a New Dark Age premiered at Carnegie Hall in February 2014 during the Ecstatic Music Festival. A review of that on Baeble Music reads:

A year in the making, "Vespers for a New Dark Age" presents a real, raw presentation of how people confront issues with technology, death and God. The piece holds a strong emotional connection to the listener that is undeniable alongside the poetry of Zapruder. I held my breath through each sonic build-up and transition hoping not to miss a note, letting out a huge breath of air once the music had slowed down--stunned, attentive and trying to perceive my own thoughts through the intensity of the piece.

The album concludes with a remix by Lorna Dune (who's also in Victoire) of "A Thousand Tongues," which features vocals from Deidre of Savoir Adore. You can listen to that remix, with a trailer for Vespers for a New Dark Age, below.

Missy Mazzoli and Victoire will be celebrating the album live on a short tour with a great and indie-oriented bill of Glasser and Noveller. Those dates begin with a release party in NYC on May 7 at Le Poisson Rouge. Tickets are on sale now. All dates are listed below.

Missy Mazzoli and Victoire will also team up before that at a concert headlined by the legendary Meredith Monk at Carnegie Hall on March 22. Meredith will be performing with a vocal ensemble, and there's also the Bang on a Can All-Stars, Don Byron, DJ Spooky, Future Quest, John Zorn and many more. Tickets are on sale now.

Missy has other upcoming events as well, including more in NYC. Her piece Isabelle Eberhardt Dreams of Pianos will be performed by Shai Wosner and the Parker Quartet on January 28 at Kaufmann Concert Hall, along with works by Kurtág and Schubert (tickets), and she'll perform with ETHEL, Mivos Quarter, Marnie Breckenridge, Joey Redhage, Nathan Schram and Robert Simonds at Columbia University's Miller Theatre on February 5 (tickets). More of Missy's events can be found here.

In related news, Victoire tourmate Noveller plays a release show for her previously-discussed new album, Fantastic Planet, two days after it comes out at Cameo on January 29. That show will be headlined by Porcelain Raft, and Ponyhof opens. Tickets are on sale.