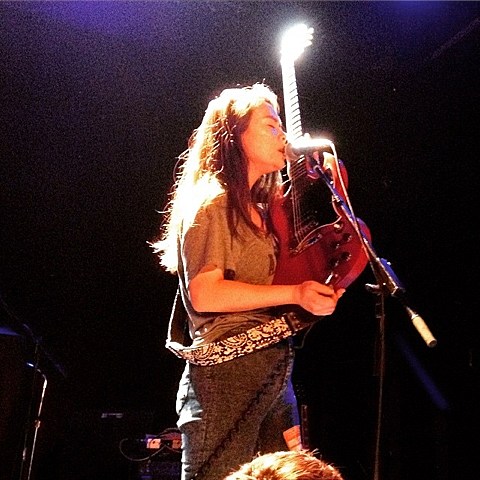 Mitski wrapped up her run supporting Speedy Ortiz over the weekend, hitting NYC at the sold-out Bowery Ballroom on Saturday (4/25). Judging by the huge cheers Mitski got during her set, it seemed like at least half of the packed crowd was there for her as much as they were for Speedy. And if that was the case, Mitski and her band definitely deserved it. Her songs are excellent, the live show just keeps getting better, and even after two months on the road, Mitski still has her throat-shredding scream.

Mitski already announced that she's heading back out on the road this summer, this time with Elvis Depressedly and Eskimeaux, which is a pretty solid triple bill.

The tour hits NYC on July 17 at Palisades. Tickets for that show go on sale Wednesday (4/29) at noon. All dates are listed below.

Earlier this month, Mitski released the deluxe edition of 2014's Bury Me At Makeout Creek (with four bonus tracks) on Don Giovanni. Watch the video for "Townie" from that album below.

Elvis Depressedly's new album New Alhambra comes out May 12 via Run For Cover, and Eskimeaux's new album OK comes out that same day via Double Double Whammy. Songs from those, also below...