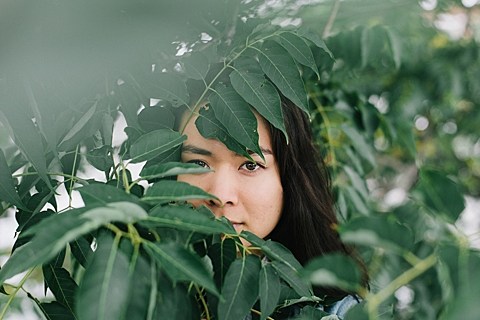 As discussed, Brooklyn singer/songwriter Mitski is releasing a new album, Bury Me At Makeout Creek, on November 11 via Double Double Whammy (pre-order). It's her first for the label and follows two indie/classical-style albums, but this one sees Mitski applying her strong sense of songwriting to the kind of DIY rock that label is known for (and members of its "house band" LVL UP have been backing her at shows). The clash ends up sounding something like Torres, Sharon Van Etten, or the newest Angel Olsen album. It's good stuff, and fans of those three should give this a listen.

She's already put out three singles from the album, and all of them have been different. The first, "First Love / Late Spring," is a dose of singer/songwriter pop, maybe the closest to her older material, but the next single, "Townie," changed any idea of her you may have had with its rougher '90s-style indie rock and Mitski's wailing vocals. Then came "I Don't Smoke," a distortion-coated slab of lo-fi with those powerful pipes intact once again.

Now she's returned with a fourth single from the album, "I Will," via NME. This one starts with minimal backing -- just bass and drums -- but similar to a song like Waxahatchee's "Brother Bryan," Mitski makes it sound like a folk song. Eventually keyboards come in too, adding a few more layers but still keeping the song from crossing over into a bigger pop territory. Hear it for yourself, plus streams of the other three, below.

Mitski has one show lined up for CMJ this week which is the Miscreant & Father/Daughter party on Friday (10/24) at Silent Barn that goes all day (2 PM - 2 AM) with Girlpool, Sharpless, Rivergazer, Adult Mom, Amanda X, Jawbreaker Reunion, Bent Shapes, Small Wonder and many more. Tickets are just $5 and still available.

After that, she'll head out on a tour with Johanna Warren which begins in NYC on November 13 at Silent Barn. All dates are listed, with the streams, below...