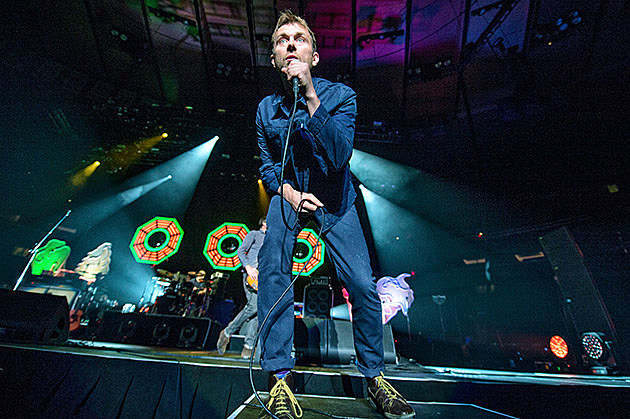 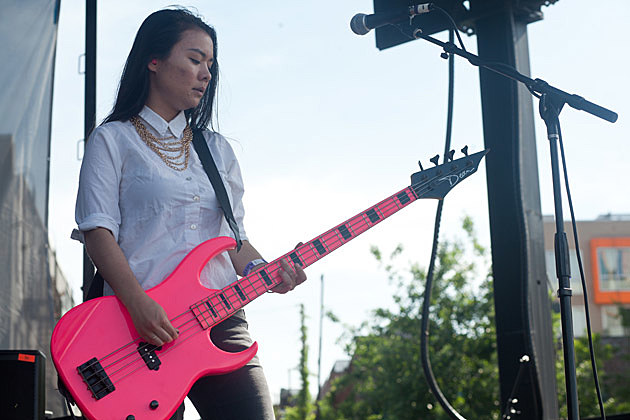 photo: Downtown Boys at Palisades in May (more by Alyssa Tanchajja) 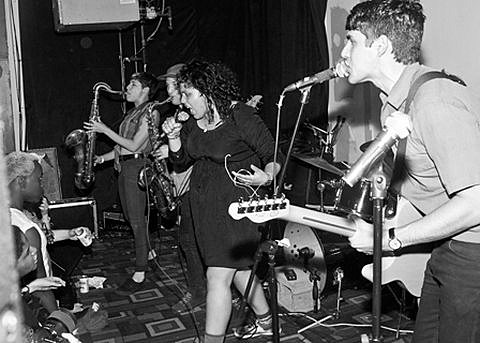 Blur have not been the most pleased with the current state of music lately. Bassist Alex James, who spends most of his time these days as a cheesemaker, said "that culture of independent music that I grew up with has disappeared really" but that the same independent spirit lives on in the current foodie movement. And frontman Damon Albarn insists songwriters are now too narcissistic and not concerned with the outside world: "But look at music now. Does it say anything? Young artists talk about themselves, not what's happening out there. It's the selfie generation. They're talking platitudes. What are any of them saying? I don't hear anything other than: 'This is how I feel.' Which is an important part of song-writing, but we're talking in the context of the election - and they don't have anything to do with it."

In a recent interview, Gigwise brought up the Albarn quote to Brooklyn singer/songwriter Mitski, who offers Damon the following advice:

Blur's Damon Albarn recently said: "Look at music now. Does it say anything? Young artists talk about themselves, not what's happening out there. It's the selfie generation." How do you feel about that?

"What is this 'music now' that he's referring to? What better, more altruistic musical era is he comparing ours to? His own? When 'Song 2' came out (a megalith of mindful lyricism, to be sure) the top five Billboard songs of the year were 'Something About the Way You Look Tonight' by Elton John, 'Foolish Games' by Jewel, 'I'll Be Missing You' by then-Puff Daddy, my karaoke staple 'Un-break My Heart' by Toni Braxton, and 'Can't Hold Me Down,' again by Puff Daddy. I just wiki'd that knowing what I'd get - wonderful classics that are about people's feelings.

"Artists young and old have and always will talk about themselves. But you know what? Young artists talking about themselves can be the most political thing done today, and is something a lot of them couldn't have done before, or at least not to an audience. Now that music has been greatly democratized by the internet, young artists, non-cis male artists, artists of color, artists who even a decade ago wouldn't have been given a voice by the few controlling the airwaves, are starting to find bigger platforms to talk about their previously silenced personal histories.

"They can reach out to and unite with other people like them, and maybe even create change through their art. All Albarn sees are younger people talking about things their own generation is facing, and he doesn't understand them, or doesn't see those issues as important, so he deems them unimportant altogether.

"That doesn't seem very evolved. That seems like a stereotypical wealthy, white man only considering his own concerns as important, his own perspective as legitimate. I would suggest he go to a Downtown Boys show, if they ever play near wherever he's living, and see if he's still of the same mind by the end of their set."

Blur was just in the US for shows at Hollywood Bowl and Madison Square Garden with Courtney Barnett (who then played Baby's All Right).

Mitski and Downtown Boys both played recently during CMJ, and DB will hit NYC again in December with Shellshag, Vacation and Bad Canoes. Watch a full-set video of Downtown Boys at Death By Audio, below.