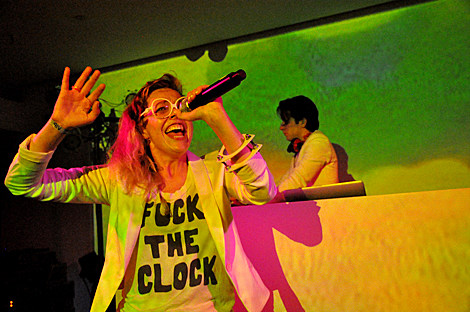 The debut LP from MNDR/Amanda Warner is still a ways off, due sometime in early 2011. Meanwhile, she features prominently (with Q-Tip) on Mark Ronson's single for "Bang Bang Bang." That song is currently No. 1 on the NME Charts, and they've been promoting it with TV appearances (like the one from the UK program Jonathan Ross, below) and live performances (like at the Creators Project in June). According to her blog, MNDR has also been busy producing the new record from Silk Flowers, to come out on Post Present Medium.

All tour dates and videos (including Jonathan Ross, though MNDR's voice doesn't seem to be its usually sturdy self) are below...