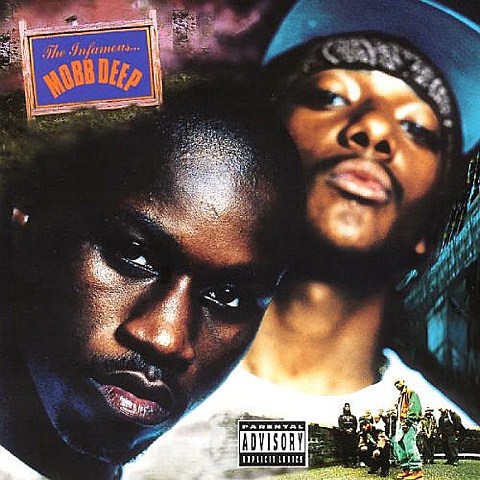 If you live or hang out in Williamsburg, you may have noticed that for most of July, the corner space at Driggs & Metropolitan has been taken over as the Levis Commuter Workspace, offering wifi, workspace, and lots of cyclist services: tune-ups, customization, washes, and more. (Also a look at the clothing brand's Commuter line). The space closes this weekend but not before Prodigy of veteran hip hop duo Mobb Deep performs at the free Closing Party there this Saturday (7/26) at 7 PM. All you have to do to get in is RSVP. There will be cocktails provided by Baby's All Right and Grady's Cold Brew, commuters can bring their bikes for complimentary tune-ups, and there will be a chance to win a Tokyobike. Do note RSVP does not guarantee entry, which is based on capacity.

Mobb Deep celebrated the 20th anniversary of the 1994 recording sessions for their classic LP The Infamous (released in 1995) this year by releasing The Infamous Mobb Deep, a two-disc set that includes their first new music since 2006 and unreleased material from the original Infamous sessions. They just made a video for "Low" (ft. Mack Wilds) off the newly-recorded portion, which you can watch below.

Mobb Deep have also been pretty active as a live group lately. They played their home city this past May at Irving Plaza and this past Thursday (7/17) they played their actual hometown when they put on their first-ever show in Queensbridge Park, as part of the ongoing Summerstage series. Vulture caught the show and wrote:

A few hours before their "homecoming" concert in Queensbridge Park last Thursday night, Prodigy and Havoc, the two halves who make up the whole of the rap group Mobb Deep, were philosophizing as to why "The QB," which is what the giant public-housing project adjacent to the park is often called, has produced so many hip-hoppers. It is a roster that includes the great Nas, Capone (of Capone-N-Noreaga), Marley Marl, Roxanne Shanté, and Mobb Deep itself, whose 1995 album The Infamous is considered a classic of hard-core urbanity, a formidable East Coast response to Dr. Dre's immortal Cali-based The Chronic. The QB's fecundity was a product of "time, space, and motion," said Prodigy, the erstwhile boy genius who, like his equally diminutive partner (neither tops five foot six), turns 40 this year. Much is owed to the Queens housing project's sheer size, said Prodigy; it was the biggest one not only in New York City but in the entire country. But more than that was "the location."

...when the group hit the stage, picturesquely set beneath the elegantly industrial arches of the renamed Edward I. Koch Bridge, a burst of joy came forth. "Queensbridge!," Prodigy shouted into the mike. "Queensbridge!" returned the crowd, which certainly included a large number of the QB "old-timers," some of whom have been living in the project for half a century and arrived in their wheelchairs to bop along to the beats. Never much for nonsense time-killing (no soft-ass, dreary R&B voicings for them), Mobb Deep went hard, kicking through their new stuff and bringing the old, really busting it on "Temperature's Rising," with its whoa! lines, "that snitch n***** gave the police your location/we'll chop up his body in six degrees of separation." The lines were just as foreboding as ever, but on this mid-summer evening, with the festive picnic crowd, the city gleaming in the sunset, no hint of mayhem could pierce the celebration.

Watch a couple videos of that show, with the new "Low" video, below...