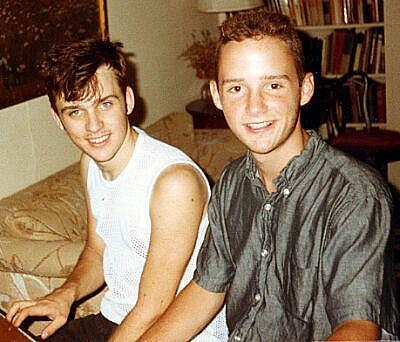 Vintage punk and hardcore must be in the air, as a ton of classic bands and members of punk royalty will hit NYC in the coming months.

Early 80s Connecticut hardcore band Vatican Commandos, who called it quits in 1985 (!), will play Mercury Lounge on July 17th along with their most famous member....

Disorder came together in Darien, Connecticut, in 1982. The original members, who had been playing together for several years under different names, were Jim Spadaccini on vocals and bass, John Farnsworth on vocals and guitar, and Chip Moody on drums. Lindsey Anderson joined on second guitar, and Chuck Weaver soon took over vocal duties. When they discovered a band from UK with the same name, they changed their name to the Vatican Commandos.
Farnsworth and Anderson were soon replaced by guitarist Richard Hall, aka Moby. In 1983, the Vatican Commandos put out the "Hit Squad for God" EP on their own Pregnant Nun label, before Moby departed and Mike Pollack stepped in. By the year's end, the band had released their second 7" as well as recorded compilation tracks for Javi Bastard's Big City Records out of New York City. 1984 saw a new 12" EP titled Point Me To The End, and the band had plans for a full-length LP, but didn't stay together long enough. They broke up in 1985.

Moby, definitely in the mood to rock lately, also has a show coming up with his new band Diamondsnake at Highline Ballroom exactly one month earlier.

Long-running hardcore band Up Front, Ed Gein's Car and Loud Youth are also on board for CT-heavy show at Mercury Lounge in July. Tickets go on sale Thursday 5/13 at 6PM.

Reports from Europa were near unanimous, Jello Biafra and the Guantanamo School of Medicine killed it at Europa in March. Luckily, if you missed that show you can catch the ex-Dead Kennedys frontman and his new venture on a Rocks Off cruise on May 28th with Shake Rattle Rattle Shake. Tickets are on sale. It's one of two boat cruises in support of UXO, an organization for soldiers who are against the war, with the second being the political hip hop duo The Coup with the great Wayne Kramer on May 31st (tickets).

Long running Southern California punk band D.I. will be at Europa on June 28th as part of a few east coast dates for the band. Tickets are on sale, and full D.I. dates are below.

Deathrockers 45 Grave will be on the east coast starting this weekend, and Dinah Cancer and the band will be in attendance at a Meet & Greet at Beauty Bar on 5/16 before their Europa show the next day (5/17) with The Dead Sextons and Psychocharger. Tickets are on sale.

And finally, Jimmy Gestapo and Murphy's Law are still going at it, and will take over a Rocks Off Cruise on August 12th. Tickets are still on sale.

Full tour dates and some videos are below....

D.I. "On the Western Front"