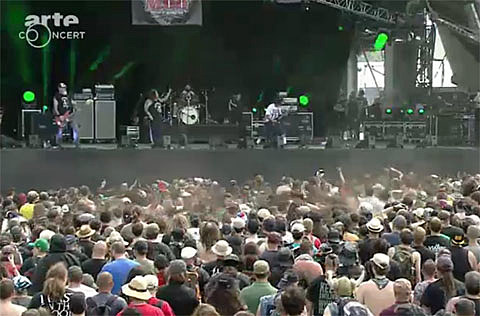 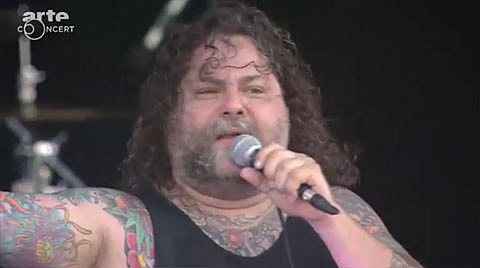 "So check it out, we're gonna be playing a lot of old stuff today. Very honored to be here. Fucking this show is amazing. just to stand here is a privilege. And believe me, I thought we were going to be on the hardcore stage. When they told us we were playing the main stage, I said you sure you have the right band? I figured they were making a mistake, but these guys got it in their head that I'm some kind of fucking legend, is that true? So I guess fucking all your moms back in the 80s really did pay off. Look at all my kids! Let me hear you!"
-- Billy Milano to GIANT Hell Fest crowd

M.O.D. are on a short European tour that brought them to the main stage of Hellfest in France today (6/20). That festival is streaming and being archived online, and you can already watch the set that's peppered with S.O.D. classics (like "Milano Mosh" and "Fuck the Middle East"), classic stage banter from Bronx born Austinite Billy Milano, and a touching tribute to his friend Onno CroMag.

Onno van Ravensteijn aka "Cromag" passed away from a heart attack in 2013 and was a great friend of Billy. You can download a free new song about Onno, called "Hermano", at MilanoMosh.com. Look for the song to also later appear on a NEW album. Billy recently said:

M.O.D. is in the final stages of writing a brand new ripping record. I had a few offers from some labels. But in the end, the offers were nothing more than worthless bullshit. I have done M.O.D. for 26 years. And I have always made a record that I was proud of. Now I want to make this record that I have been working very hard on for the last 6 months. That is where you fans come in. I have always helped out many bands and musicians. And now I am asking my fans for donations to help make this record a reality. M.O.D. is currently getting ready to leave for our European tour as I type this. In return, I am offering you a very real NYHC Punk record that will be the best M.O.D. record I have ever done. The record will be available as a FREE download to all the M.O.D. fans in the world.

Tour dates and Hellfest video below...