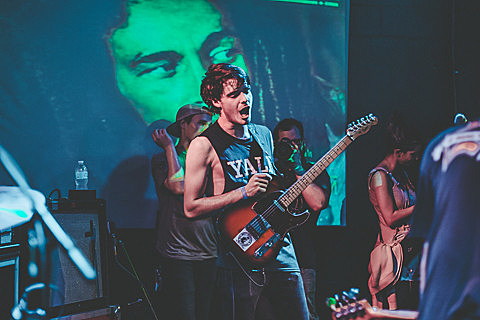 Modern Baseball, Beach Slang, Spraynard, Hurry, The Weaks and Marietta are releasing a 6-way split called Strength In Weakness on February 3 via Lame-O Records, which will benefit United Cerebral Palsy. Modern Baseball's contribution, "Alpha Kappa Fall of Troy The Movie Part Deux," just premiered over at Billboard, and it's a '90s-style rocker that's scrappier than anything on last year's great You're Gonna Miss it All. Check it out below.

Both Modern Baseball and Beach Slang will be at this year's Skate & Surf Fest in Asbury Park, but you can catch Beach Slang in NYC much sooner than that. Their co-headlining, BrooklynVegan-curated Red Bull Sound Select show with Hop Along happens on Tuesday (1/13) at Baby's All Right with Aye Nako and Ryley Walker. I'll also be DJing between sets. That's $3 at the door with RSVP or $10 without. No advance sales, and all door money is going to be donated to CancerCare.

That show is three days after the BV-presented Slingshot Dakota / Runaway Brother / Crazy & the Brains / Vasudeva show (1/10) which is also at Baby's All Right.