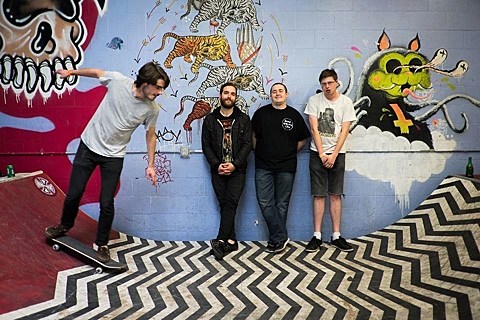 As discussed, Modern Baseball, Beach Slang, Spraynard, Hurry, The Weaks and Marietta are releasing a 6-way split called Strength in Weakness (due 2/3 via Lame-O), which will benefit United Cerebral Palsy. Modern Baseball, Spraynard, The Weaks, Marietta have now announced two release shows for it, Philly and Brooklyn, and proceeds from those will benefit UCP as well. The Brooklyn show happens February 15 at Saint Vitus, which is a pretty small place for a headliner who just packed MHOW and Gramercy Theatre. Tickets for that one are on sale now.

Modern Baseball are also touring Europe with Into It. Over It. and Tiny Moving Parts in March, and playing Asbury Park's Skate & Surf Fest (5/16-17) with Beach Slang, Small Brown Bike, The Front Bottoms and more (tickets). All of their dates are listed below.

The Weaks will also be in NYC opening Joyce Manor's free MHOW (1/15) show on Thursday. RSVP is closed.

Listen to Modern Baseball's contribution to the split, with their list of dates, below...