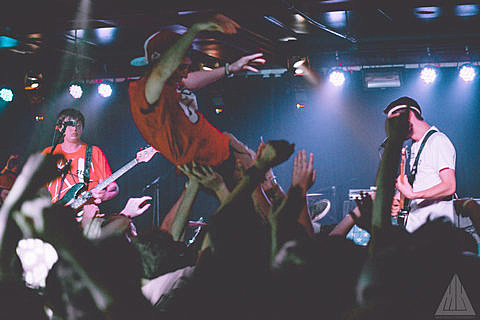 Two Philly bands with great releases out this year, Modern Baseball and Beach Slang, will be heading out on a tour together this September. That includes a run with I Am the Avalanche which doesn't hit NYC (IATA play NYC tonight [7/18] with Somos though), but right before that, MoBo and Beach Slang will be here for a free show at Brooklyn Night Bazaar on September 5 with quality locals Chumped and Crow Bait. That run is leading up to MoBo's appearance at Riot Fest Chicago. All dates are listed below.

Meanwhile, Chumped play NYC tonight (7/18) as part of the Gigawatts Festival. They go on at 12:30 AM at 97 Wyckoff (4th fl), right after Field Mouse. Not long after that, they play Suburbia on July 26 with Save Ends, Laureate and Cassevettes.

Crow Bait also have other local shows coming up, including Shea Stadium on July 23 with Deep Pockets (who were good at Saint Vitus last night), Eureka California and Good Grief; the Acheron on August 4 with their Don Giovanni labelmates Brick Mower, The Elsinores and Giant Peach (tickets); and a previously mentioned Grand Victory show with Dead Stars and others in August.

All Modern Baseball/Beach Slang dates are listed, with album streams from all four bands on the BKNB bill, below...

Modern Baseball - You're Gonna Miss It All

Beach Slang - Who Would Ever Want Anything So Broken?

Crow Bait - Sliding Through The Halls of Fate (via Paste)