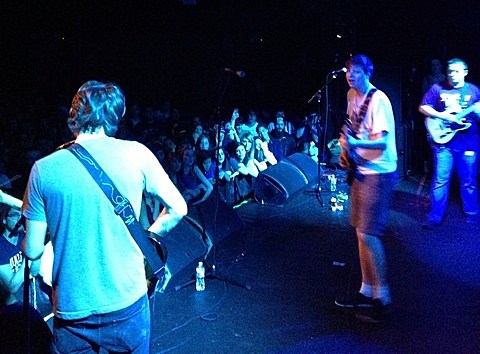 Modern Baseball wrapped up their tour with Foxing (who told us their favorite LPs of 2014), Somos, Crying and Knuckle Puck in NYC last night (12/15) at Music Hall of Williamsburg. It was their second show here after playing Gramercy Theatre on Friday (12/12). There was a good amount of collaborating from the bands on the bill throughout the night, with Foxing singer Conor Murphy joining Crying for a cover of Smashing Pumpkins side project Rage Against the Machine's "Testify," and Crying drummer Nick Corbo sitting in with Modern Baseball as MoBo drummer Sean Huber took the mic for his part in "Your Graduation."

"Testify" wasn't the only fun cover on this tour. Modern Baseball put their scrappy pop punk spin on a rendition of Smashing Pumpkins side project The Killers' "When You Were Young," with bassist Ian Farmer taking over on lead vocals. No videos yet of the MHOW show specifically, but you can check out a video of the Killers cover from another tour stop (with Brendan Lukens singing this time) and a short clip of the "Testify" cover, below.

Modern Baseball's next NYC-area show is opening the second of two Taking Back Sunday holiday shows at NJ's Starland Ballroom (12/28) (sold out). TBS' first night is with The Menzingers, who also play a holiday show with Tigers Jaw.

Modern Baseball - "When You Were Young" (The Killers cover)