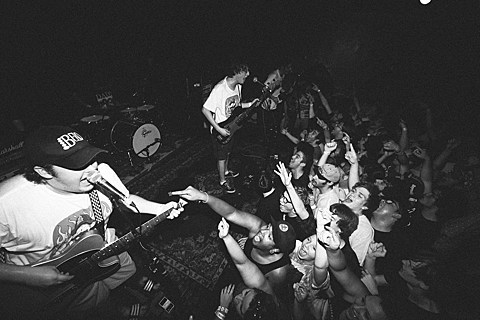 Philly's Modern Baseball were just in NYC for the Run for Cover CMJ showcase with Pity Sex, Cloakroom, Tigers Jaw, and many of their other labelmates; and we just mentioned they'd be back soon to open for The Menzingers at their sold-out show at Bowery Ballroom (11/29), that also includes Banquets and Ma Jolie.

Modern Baseball initially released their debut full length, Sports, in 2012, but Run for Cover repressed it earlier this year. One of its tracks, "Play Ball," was also featured on this year's Topshelf Records sampler. In this time since the record's initial release, the band has built quite the devout following, which is pretty clear from the full-set video of their recent acoustic show performing Sports in its entirety, where the crowd can be heard singing every syllable. And it's definitely the kind of music for that too, with quotable line after quotable line in a nasally, lyrical manner with some Weakerthans vibes. But also with an endearing knack for scrappy lo-fi rock that sounds like it was written and recorded in a college dorm.

The video of that acoustic show just premiered over at Property of Zack, and you can watch it below. Shot by Ally Newbold and Jason Figueroa. Also below is a list of all tour dates and a full stream of their album.