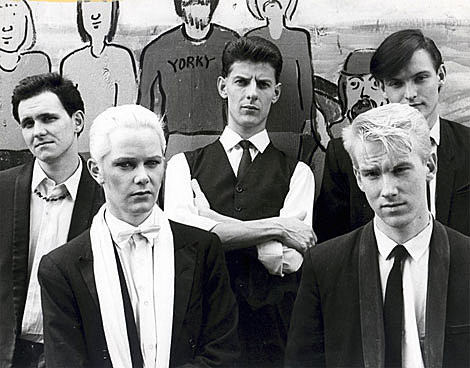 Yesterday we posted that Modern English were playing a Friday night show at the Studio at Webster Hall in NYC. It seemed unlikely, but there was a flyer, and tickets and everything. Shortly after the post we updated it with "cancelled". The full story from the promoter below...

The following email has been sent from original members of the band MODERN ENGLISH regarding tomorrows show at Webster Hall. This show is NOT A MODERN ENGLISH SHOW AND DOES NOT FEATURE ANY ORIGINAL MEMBERS OF THE BAND AS INDICATED ON THE POSTERS AND TICKETS. THE PEOPLE PERFORMING WERE NEVER IN THE BAND WHEN "MELT WITH YOU" WAS WRITTEN AND LEGAL ACTION IS BEING SOUGHT AGAINST THEM. please see email below..

Hi Daniel, I'm writing from London on behalf of Robbie Grey and Mick Conroy: both original members of Modern English. Its just to let you know that legel action is currently being taken out against Ted Mason for his unauthorised usage of the name Modern English. Ted never was an original member of the band and has absolutely no right to use the band name. To date his Modern English myspace has been closed down and a legal case prepared. The advertisments for tomorrows show at Webster Hall shows a picture of the original members on the Webster Hall website and an image of Robbie Grey on the ticket. NO ORIGINAL MEMBERS will be performing at the show. It is therefore misleading to fans of the band expecting to see original members perform Modern English songs as your tickets lead us to believe. fans attanding the show need to be informed my clearly displayed notices explaining that no original members are performing and that the band appearing are NOT MODERN ENGLISH. Failure to do this will lead to action being taken against Flashbackalternatives.com. A representative of the band in New York will be attending the show on our behalf to ensure this is done. Regards Modern English

THAT WAS FOLLOWED BY THIS:

Re: NOT ORIGINAL MEMBERS OF MODERN ENGLISH PERFORMING

Postby djed » Thu Jul 30, 2009 11:25 am
In light of the post above (and other e-mails), Modern English will NOT be playing at the Flashback Alternatives 10 Year Anniversary Party tomorrow night.

I am highly embarrassed by this and was not aware of the illegal use of the Modern English name.

My apologies to Robbie Gray and Mick Conroy, to the Modern English management team, and to the listeners and supporters of Flashback Alternatives. It was never the intent to deceive anyone, or to infringe on anybody's rights or trademark.