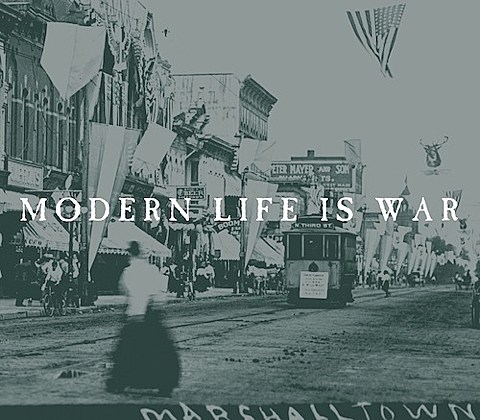 Modern Life Is War ended a four-year hiatus in 2012 and released their very solid comeback album, Fever Hunting, the following year. But their finest hour remains 2005's Witness, an essential record in melodic hardcore that helped set the precedent for Touche Amore (who had MLIW vocalist Jeff Eaton sing on their first record), Defeater and many others in the genre's current wave. So it's exciting to hear that for Witness's tenth anniversary, Modern Life Is War are reissuing it and playing it in full on tour!

According to the press release, the album "has gotten a complete revamping as well as a spectacular remastering by Brad Boatright at Audiosiege. Packaging for both CD and vinyl formats of Witness has also been drastically improved; for the first time ever, the vinyl version is presented in a deluxe gatefold jacket with a 12-by-12-inch 28-page booklet. While the CD version comes in new eco-friendly packaging, both formats also include additional liner notes from listeners worldwide." The reissue comes out June 2 via Deathwish.

Their tour has them playing it in full on their June/July US run, which hits NYC on June 6 at the Marlin Room at Webster Hall. Tickets for that show go on sale Friday (4/3) at noon.

The band were also part of today's stacked lineup announcement for Atlanta's inaugural Wrecking Ball Festival that also includes Descendents, Judge, Desaparecidos, The Get Up Kids, The Movielife, Title Fight, American Nightmare, Samiam, Braid, The Appleseed Cast, Knapsack, Blacklisted and so many more.

All dates are listed, along with a couple standout tracks from Witness, below...