Modeselektor at Bowery Ballroom in 2009 (more by Zach Dilgard) 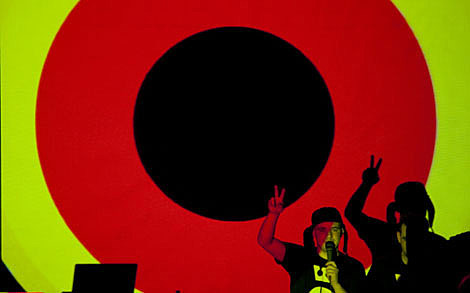 Modeseletkor released Monkeytown last year and toured Europe in support of it. When they announced that tour, they promised that the US, Asia and Australia would get their own "Monkeytown" tour in 2012. That US tour has been announced and it will go down this April. It includes their appearances at the two Coachellas and NYC shows happening on April 17 at Music Hall of Williamsburg and April 18 at Bowery Ballroom. Tickets for both NYC shows are on AmEx presale now and go on sale to the general public on Friday (3/9) at noon.

Check out the video for Monkeytown track "Shipwreck," which features Thom Yorke (who is currently in Austin), along with all dates below...