photo: Modest Mouse in Queens in 2014 (more by Mimi Hong) 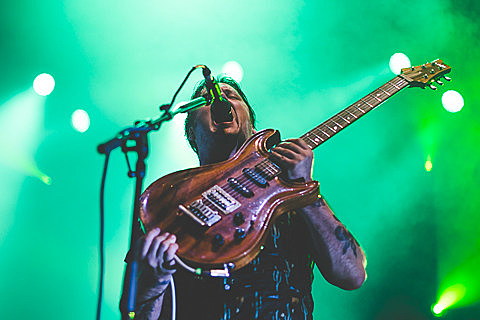 As you may know, Modest Mouse are finally releasing a new full length, Strangers to Ourselves, on March 3 via Epic (their first since 2007), and they've now put out its second single, "Coyotes." This one sounds a little more like classic Modest Mouse than the reggae-ish "Lampshades on Fire," and it's making me pretty excited to see how this album turns out. Watch the video, via Modest Mouse fan site Interstate-8.com, below.

Interstate-8 also points out that the first 2,500 vinyl pre-orders of the new album from ModestMouse.com will receive a free 7" of the "Lampshades on Fire" / "Coyotes" single, which otherwise won't be available for individual sale.

Modest Mouse's only upcoming date at the moment is Gasparilla Music Festival, which happens March 7-8 in Tampa with The Gaslight Anthem, Hiss Golden Messenger, Gogol Bordello and more (tickets).