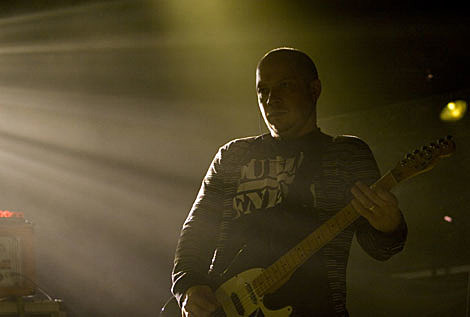 Mogwai kick off their three-night stay at Music Hall of Williamsburg in Brooklyn tonight (4/27-4/29). If you see video cameras, it's because the sold out shows are being documented for an upcoming film by independent flimmaker Vincent Moon of La Blogotheque Take Away Show fame.

If you miss the shows, you can also catch the band when they are back in the NYC-area over the summer to play All Points West. Their upcoming tour plans also include a lot more North American shows and a ton of European festival dates including T In The Park, Field Day, and the Oxegen Festival with the reunited Blur, Kings of Leon, Nine Inch Nails, Jane's Addiction, The Killers, and many many others.

Supporting the band on a large chunk of that North American trek are fellow Scots The Twilight Sad. TWS recently completed mixing of their upcoming LP (due "sometime this summer"), as evidenced by the following tweet: "lassssssssssssssssssssssssssssssssssst day of mixing today, then wrestlemania." Who knew that the sensitive Scots enjoyed watching a man's head smash into a turnbuckle? In California, Mogwai also play three shows with Dead Meadow.

Dominic of Mogwai's other pastime, Crippled Black Phoenix, recently played Mercury Lounge on 4/12 while on tour with Brooklyn's Ghastly City Sleep. GCS has only one additional date on their calendar, May 10th in Philadelphia with the mighty Gods & Queens.

All Mogwai tour dates and a recent La Blogoteque live video of Mogwai from Reims is below...