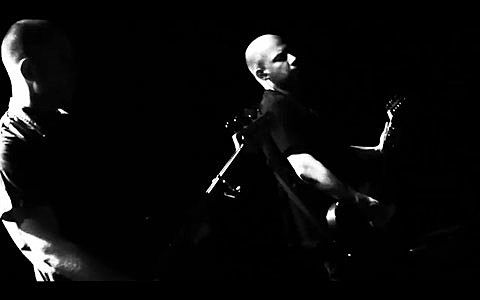 "When Mogwai asked me to shoot a live film with them, it was supposed to happen in Japan. Finally, it had to be in Brooklyn, at the Music Hall of Williamsburg, over 3 nights. Yeah, a bit less exciting, but hey it wasn't really the point. The point was: how to film Mogwai? How to take up the challenge of filming, not only a band on stage (i already expressed many times my lack of interest for the exercice), but MOGWAI!?
Who ever saw Mogwai? a band you would feel more than see - i spent most of their shows eyes closed. How to add images to their sounds, and why?
I asked old pal Nathanael Le Scouarnec to work with me on this. He did most of the edit on the film, and i have to say it's a mindblowing work. The combination of its edit skills and a cherished b/w aesthetic, makes Burning, a 50 minutes experience hopefully reaching towards abstraction at some point. Ah but, it's a film you have to see on a BIG screen with a BIG sound, deal?" - [Vincent Moon, Burning's director]

Mogwai releases their new live DVD document Burning and LP Special Moves TODAY in DVD, downloadable video, CD, and LP packages (order them). For those of you who enjoy your film-going experience en masse, the band is screening the film at multiple outlets over the coming months including the newly added 9/11 showing at the Met, and TONIGHT (8/24) at Music Hall of Williamsburg (tickets).

Want to go to MHOW tonight? We have two pairs of tickets available for giveaway. Details on how to win, with videos and UK tour dates, below...

===============
Want a free pair of tickets to Burning at MHOW? Email BVCONTESTS@HOTMAIL.COM (subject: "What is this Burning in my eyes?"). Include your first and last name. Winners will be chosen at random and contacted ASAP.