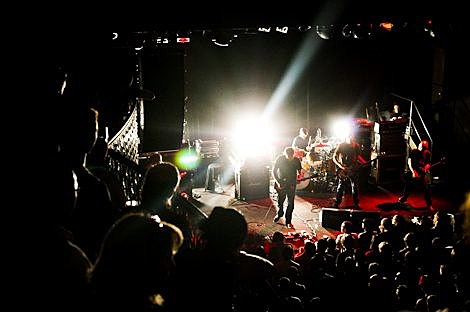 Hello all and a happy new year.

2011 was a great year for us releasing our Hardcore Will Never Die album and playing 124 shows (our busiest ever). We were constantly surprised and grateful for the support we received throughout both through people coming to see us play all over the world and the goodwill shown towards our record. The only blemish on an otherwise brilliant year was us twice having to postpone shows in North America. Firstly because of a visa delay and secondly because of ill health.

We can't apologise enough to the people who arranged travel and bought tickets to see us. Both of these postponements were completely out with our control and the shows would not have been postponed if there was anyway possible to make them happen. That said we realise fully how disappointed people were who had bought tickets only to find out very close to the shows that we were postponing. In light of this we are very happy to announce the rescheduled dates along with new dates for next May and June. It will likely be the last extensive touring we do for some time so we hope it will be a very special tour.

Tickets people still have for the original Boston and Washington DC shows will be honoured at the door.

Thanks for your patience!

Mogwai's two NYC dates aren't just make-up shows. The Scots have announced a full tour surrounding the previously discussed dates, that will kick off in Vancouver and terminate a little less than a month later in Chicago. Tickets for all shows go on fan presale on 2/1 at 10AM in their respective time zones. Tickets for both NYC dates are also currently on presale via Ticketmaster, and go on regular sale on 2/3 at noon.

All tour dates and some videos, below.