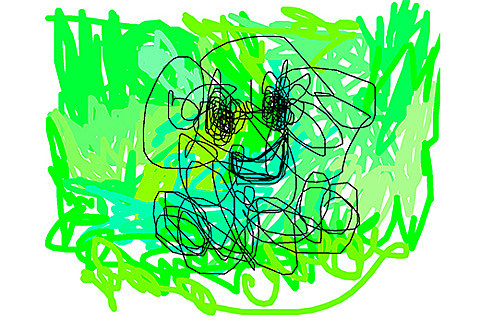 MoMA PS1's "Sunday Sessions" are wrapping up for the season, and will finish with a show by Micachu on May 3 titled "Local Holiday, Local Sun, Locals, Local Rain, Local Number, Local Drink, Local Customs." It's a one-off show featuring new material and projections from her sketchbook (like the one seen above). Tickets are on sale. Micachu's most recent work was her eerie score to 2014's terrific sci-fi film Under the Skin.

This week's "Sunday Sessions" (4/12) features Delia Gonzalez performing her new work In Remembrance which consists of four ballet films set to a live piano score. (The CD/DVD and LP/DVD releases of In Remembrance will come out via DFA on April 28, stream a track below.) Gonzalez will be accompanied by Alice Cohen, Bryce Hackford, Adrian Knight, and David Lackner. The afternoon also features a live ambient set with visuals by musicians, designers, and videographers Georgia, a live hardware techno set by Malory, and a DJ set with visuals from Heathered Pearls. Tickets are on sale.

April's other "Sunday Sessions" include a Tribeca Film Festival screening of Celia Rowlson-Hall's MA on 4/19 (advance tickets sold out); and Sharifa Rhodes-Pitts: YOU BETTA WERK on 4/26 (tickets).