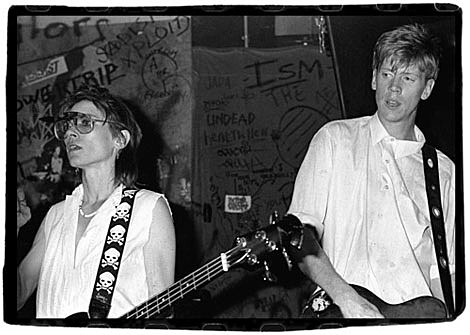 As previously mentioned, MoMA's Looking at Music: Side 2 opens June 10th and will run to November 30th. The exhibit, which catalogs NYC's early '70s and '80s music scene, will include an installation of photos, videos, audio and more, as well as live events, and punk-film screenings from September-November".

Other highlights of the exhibition include rock film screenings (The Blank Generation, New York Dolls - All Dolled Up, and others), Bob Gruen's 1976 video "New York Death Cult (Live at Max's Kansas City)" which features footage of the famed New York music venue from that era, early issues of Search & Destroy, Punk Magazine and Interview magazine, and lots of audio stations playing "iconic music from the era".

Not connected with Looking at Music, but also happening at MoMA: the next MoMA Monday Nights show (a PopRally event) will be Stars Like Fleas on June 8th (5:30pm-8:45pm). More info, and a coupon for half-off entry to the show can be found HERE.

More details on Looking at Music, with film schedule, below...

Looking at Music: Side 2 info

The Museum of Modern Art presents Looking at Music: Side 2, a survey of over 120 photographs, music videos, drawings, audio recordings, publications, Super 8 films, and ephemera that look at New York City from the early 1970s to the early 1980s when the city became a haven for young renegade artists who often doubled as musicians and poets. Art and music cross-fertilized with a vengeance following a stripped-down, hard-edged, anti-establishment ethos, with some artists plastering city walls with self-designed posters or spray painted monikers, while others commandeered abandoned buildings, turning vacant garages into makeshift theaters for Super 8 film screenings and raucous performances. Many artists found the experimental music scene more vital and conducive to their contrarian ideas than the handful of contemporary art galleries in the city. Artists in turn formed bands, performed in clubs and non-profit art galleries, and self-published their own records and zines while using public access cable channels as a venue for media experiments and cultural debates.

Barbara London states: "This exhibition shows how musicians and artists coalesced at a time when New York City, while financially struggling, seemed to incubate innovative ideas and facilitate the phenomenal success of a few, marking the transition into the next, more commercial decade of artists in New York City."

Outside The Yoshiko and Akio Morita Gallery, Looking at Music: Side 2 is introduced through a title wall designed by the New York artist Laurie Anderson. Within the exhibition James Nares's video, Game (1975), greets viewers at the exhibition's entrance. Active in the 1970s on the Lower East Side as a Super 8 filmmaker and member of The Del-Byzanteens, Nares concocted a percussive, imaginary board game, performed with Seth Tillett, which he turned into the subject of his experimental film. Nares's work is accompanied by a monitor displaying segments from Glenn O'Brien's late 1970s Manhattan Public Access television show, TV Party. Equal parts party, talk show, video art, concert, and political action, TV Party took live television to a place it had never been before, including interviews with a number of the artists included in the exhibition. Also on display are drawings by Patti Smith and an audio station playing her song Hey Joe/Piss Factory (1974), considered to be the first punk rock record and funded by the photographer Robert Mapplethorpe. Two tracks from The Ramones, widely cited as the first punk rock group, play at a nearby audio station, including "Beat on the Brat" and "Blitzkrieg Bop" (1976). In vitrines, poetry from the musician Richard Hell and a record from the German artist Martin Kippenberger's short-lived musical project with Christine Hahn and Eric Mitchell are on display.

The exhibition next focuses on the work of New York based Colab, a non-profit artist collective distinguished for political engagement and the co-opting of public spaces, including an abandoned building in the heart of Times Square in 1980. In a set of video monitors, works from Colab artists are on display, including Coleen Fitzgibbon, a founding Colab member and instigator of the Times Square Show, which housed socially themed artworks in a derelict Times Square building. With a background in 1960s structuralist cinema, Fitzgibbon's Super 8 film transferred to video, Time (1975), is a nonstop visual flow of headlines and text, all drawn from an issue of Time magazine, with the effect of an incessant restlessness of the filmic frame. On a nearby monitor, the music video Frankie Teardrop (1978), set to the New York-based band Suicide, is on display. This coarsely-textured film-video hybrid combines super-imposed projector manipulations and high-end video post-production. An insightful collaboration between videomaker Paul Dougherty and Art-Rite zine editors Walter Robinson and Edit DeAk, the work interprets a strident song by Suicide about a poverty-stricken Vietnam vet pushed to the edge. These works are surrounded by posters, audio, and a video by Judith Barry, Richard Kern, and the New York band Sonic Youth and the work of Beth and Scott B.

Looking at Music: Side 2 next examines the cross-influence of hip hop and art in New York City, including the video of Rapture (1981) by Blondie. Rapture, the first video to incorporate elements from rap on MTV, opens with choreographer William Barnes dancing in a white suit and top hat in New York's Upper East Side. Barnes is joined by Debbie Harry and her bandmates--easy-going, cross-over artists who bridged uptown and downtown scenes. In the final sequence of the music video, the band dances down a street passing Fab 5 Freddy and graffiti artists Lee Quiñones and Jean-Michel Basquiat in action. The video is accompanied by photographs of Basquiat's graffiti work from the 1970s, by Peter Moore and Stephanie Chernikowski, and a large-scale drawing by the artist, Untitled (1981).

The exhibition concludes with images from five rock n' roll photographers. Adjacent to a large-scale photographic collage of the work of Bob Gruen, adapted from the 2007 installation Rock and Roll Teenager's Bedroom and measuring 7.5' x 22.5', the exhibition includes vitrines with photographs of Suicide by Godlis and Sonic Youth by Stephanie Chernikowski, along with additional photographs by Roberta Bayley and Marcia Resnick. On a monitor beside these works is Bob Gruen's New York Death Cult (Live at Max's Kansas City) (1976), featuring grainy footage from famed music club Max's Kansas City, which captures the raw, immersive spirit of up-and-coming musicians of that era such as Patti Smith.

MoMA ONLINE:
Website: An online exhibition will provide an interactive presentation of the works included in Looking at Music: Side 2, with a slideshow of selected highlights, interpretive texts, and original acoustiguide conversations recorded for the exhibition. The site will launch by June 17, 2009. www.moma.org/lookingatmusic2
FlickR: In conjunction with MoMA's exhibition, visitors to MoMA's FlickR page, http://www.flickr.com/groups/lookingatmusic, will be able to add personal photographs and remembrances of the music and art of New York City during the 1970s and 1980s.

"Modern Poets: Raw Edges"
Friday, July 24, 2009, 7:00 p.m.
The Abby Aldrich Rockefeller Sculpture Garden
A poetry reading in conjunction with the exhibition Looking at Music: Side 2 will be held in the Museum's Sculpture Garden. Participants include musician and writer Richard Hell, whose work is also included in the exhibition, along with poet Eileen Myles, and poet, actor, and musician Saul Williams.

Modern Mondays
Monday, October 19, 2009 Modern Mondays, The Museum of Modern Art's Monday night screening series of new works by contemporary filmmakers and multimedia artists, features engaging and thought-provoking programming by a diverse selection of cutting-edge international artists. On October 19, a conversation will be held with artist-musicians, exploring the influence of music on the art of the 1970s. Further details and participants to be announced on www.moma.org.

A film-and-video series which features works by a selection of video artists and film directors will be screened in The Roy and Niuta Titus Theaters between September and November 2009. The program is organized by Ms. London.

Taxi Driver. 1976. Directed by Martin Scorsese.
A Vietnam war veteran works as nighttime taxi driver in NYC, whose perceived decadence and sleaze feeds his urge to violently lash out, attempting to save a teenage prostitute in the process.
Monday, September 21, 7:00 p.m.
Sunday, September 27, 5:00 p.m. T2

New York Dolls - All Dolled Up. 2005. Directed by Bob Gruen and Nadya Beck
This documentary captures the band during early performances in New York at Kenny's Castaways and Max's Kansas City, then follows the Dolls on their tour of the west coast, including footage from the Whisky A Go Go, the Real Don Steele Show, Rodney Bingenheimer's E Club, and much more.
Wednesday, September 23, 4:00 p.m.
Monday, September 28, 7:00 p.m. T2

The Blank Generation. 1976. Directed by Ivan Kral, Amos Poe.
Amos Poe and Ivan Kral married silent footage with live tapes or demo recordings of bands (most of whom had yet to release a record) to create a deliberately rough audio-visual record of the burgeoning punk scene, including bands such as Blondie, Talking Heads, The Ramones, and The Heartbreakers.
Saturday, September 26, 4:00 p.m.
Wednesday, September 30, 4:00 p.m. T2

Blank City. 2009. Directed by Celine Danhier
A documentary about New York City in the late 1970s, when underground filmmakers collaborated with experimental musicians and vanguard performance artists, all on a shoestring budget, to create the most daring work of their generation.
Thursday, October 1, 7 p.m., T2
Saturday, October 3, 1:30 p.m. T2

Deadly Art of Survival. 1979. 58 min. Directed by Charlie Ahearn.
Charlie Ahearn's first Super-8 feature is a Bruce Lee-style docu-epic, shot in the housing projects of the Lower East Side, with a story revolving around the real and imaginary rivals of an idealistic martial arts school led in actual life by the star of the flick, Nathan Ingram.
Underground USA. 1980, 85 min. Directed by Eric Mitchell.
In this 16 millimeter film, Victor (played by Eric Mitchell), a street hustler, meets Vicki (played by Patti Astor), a Manhattan movie star who has fallen from fame, at New York venue the Mudd Club. The two entertain each other for a while, but Victor betrays Vicki, leading to a bleak ending.
Monday, October 5, 7 p.m., T2
Wednesday, October 7, 4 p.m. T2

Downtown 81/ New York Beat Movie. 1981 and 2000. Directed by Edo Bertoglio, written by Glenn O'Brien, and produced by O'Brien and Maripol.
The story of a charismatic artist (Jean-Michel Basquiat) who attempts to sell a painting amidst the rappers, junkies, strippers, models and art-world matriarchs on the Lower East Side. With music by Kid Creole and the Coconuts, Tuxedomoon, The Plastics, DNA, The Lounge Lizards, and Basquiat's own band, Gray.
Friday, October 2, 7 p.m., T2
Sunday, October 11, 5 p.m., T2

Men in Orbit. 1979, 33 min. Directed by Lydia Lunch, written by John Lurie
A "sci-fi povera" film shot on Super-8, "Men In Orbit" features musician John Lurie and Eric Mitchell as chain-smoking astronauts occupying a decrepit New York living room transformed into a spacecraft.
G Men. 1978, 40 min. Directed by Beth and Scott B.
An exploration of social schizophrenia in which terrorists consult their mothers before planting bombs, and the head of the NYC bomb squad succumbs to his dominatrix. With Bill Rice and Marcia Resnick.
She Had Her Gun All Ready. 1978, 28 min. Directed by Vivienne Dick.
With Lydia Lunch and Pat Place, this film, set in the Lower East Side, is about unequal power between two people (of any gender), or the repressive side of a person in conflict with the sexual powerful side.
Wednesday, October 7, 7 p.m., T2
Sunday, October 18, 5:30, T1

Stranger than Paradise. 1984. Directed by Jim Jarmusch.
A self-styled New York hipster (John Lurie of the Lounge Lizards) is paid a surprise and quite unwelcome visit by his sixteen-year-old Hungarian cousin. From initial hostility and indifference a strange affection grows between the two exiles.
Saturday, October 17, 8 p.m., T1
Sunday, November 29, 2 p.m., T2