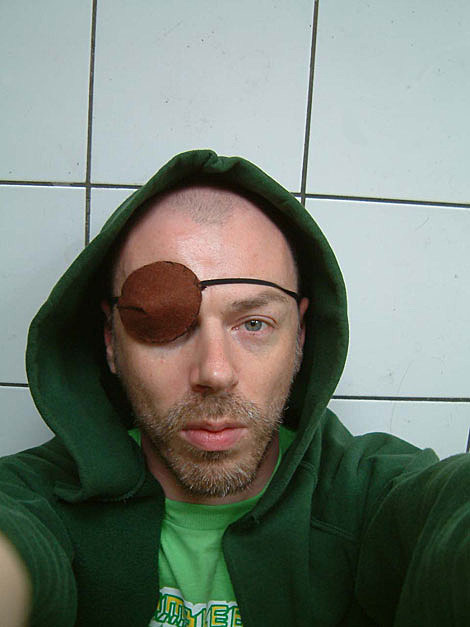 "Between 1996 and 2003, Momus -- the playful, articulate, intimate Scottish songwriter who's unpacked and repacked a gamut of styles from jangly indie thru folktronica and chamber pop to breakcore -- toured the States pretty much every year. Wildly successful in Japan but met with a certain amount of "meh" in his native Britain, Momus in the late 90s hoped to "break America" with songs about his penis, get-rich-quick schemes like selling song-portraits for $1000 apiece, and quirky electonic reworkings of Appalachian folk music. To some extent he succeeded: 2003's American Patchwork Tour showcased a bunch of US bands Momus signed to his own label: The Gongs, The Super Madrigal Brothers, Rroland, Phiiliip. Momus even moved to New York City in 2000, but left for Tokyo shortly after 9/11."

Momus will perform the Momuthon, a three-hour retrospective of his work, at the Highline Ballroom on Tuesday, May 26th. Tickets are on sale.

Much of Momus' music is available for free online. The MP3 above is a pre-production version of a song from his 2003 album Oskar Tennis Champion. Check his website's audio section or UbuWeb for more free discs.

Details about all three sets of the Momuthon's below...

Coming to New York for art stuff, Momus usually tacks on a New York music show almost as an afterthought. This year, however, something bigger is happening. His new show, a three-hour Momuthons -- will be unmissable for Momus aficionados as well as younger kids who've only just discovered his work on YouTube.

Set 1: Songs from the 1980s, from previously-unheard juvenilia (songs influenced by Eno, Magazine, Talking Heads) to live versions of Momus' albums on cult UK labels like 4AD, él and Creation.

Set 2: Songs from the 1990s -- when Momus was living in London and Paris -- as well as the Top 10 chart material he was writing for Japanese Shibuya-kei singers like Kahimi Karie, Emi Necozawa and Poison Girlfriend.

Set 3: Songs from the 2000s, when Momus helped invent the Folktronica genre and gave his music a more experimental sound, thanks to collaborations in Berlin with artists like Anne Laplantine and Germlin.

The Momuthon -- performed by one singing, talking man, a couple of special guests, an iPod and a guitar -- will be a career summary, a guided tour (with anecdotes) of a fascinatingly oblique worldview, a history of thirty years of independent music, a virtual trip from Scotland to Berlin via London, New York, Paris and Tokyo, and -- if you're into Momus and his music -- a damn good night out.