Bloody Panda in May at Knitting Factory (more by Greg Cristman) 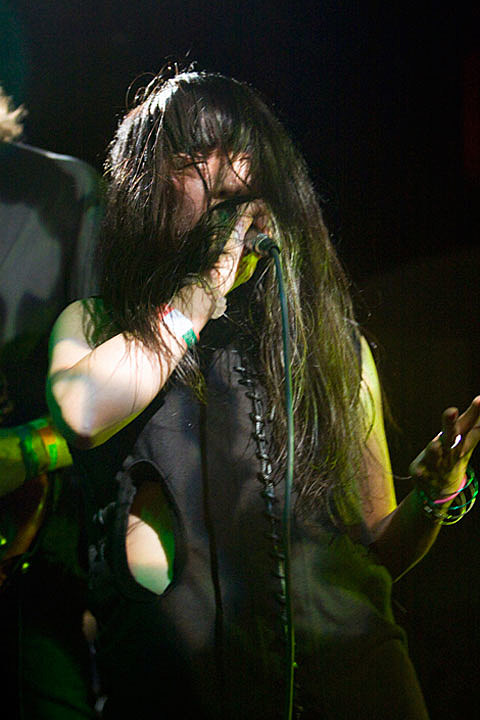 BrooklynVegan and Haunting the Chapel are proud to present two nights of punishment. The great Bloody Panda will descend upon NYC with French doomers Monarch (!) as part of a short tour for the two bands. The NYC shows will take place on November 12th at Cake Shop with the incredible Rhode Island noise destructors Tinsel Teeth (who are known for their out-of-control - NSFW - shows) and November 13th at Union Pool with a decidedly more metal touch from death-doom dealers Evoken.

NYC is just one stop on a larger US tour for the fantastic Monarch, who will tour the West Coast with Trees before heading out for the Bloody Panda dates. They are all listed below.

Monarch's current release, the punishing Mer Morte, is out now via Crucial Blast. The one-track LP has sections streaming at the Crucial Blast site, and is out now. Awesome band.

Tinsel Teeth, if you aren't familiar, is psychotic noise-damaged punk from Rhode Island. The band released their latest LP, Trash as the Trophy, on Load Records and is absolutely unmissable (Pandas may not be the only 'bloody' ones at Cake Shop).

There aren't many bands that do funeral doom as sickening as Evoken, and luckily as an NYC'er, I have been able to catch the band a few times. The Union Pool show is one of two shows on the calendar for these sickos and then the band will go into slumber until early 2012 when they will release their new LP. More details on the second show on 12/14 are coming, but if you want to see Evoken in the next year, these are your two chances.

The NYC shows are two of three collaborations between myself and Brandon Stosuy, as we will also present Krieg and Woe at Knitting Factory on Saturday (10/30) at 11:59 PM. $5 gets you in the door (tickets) or you can pay $2 if you're already there to see AGE/Hellshock earlier that evening.

Full Monarch tour schedule is below, along with some live video, though: caution, the Tinsel Teeth video may be NSFW...