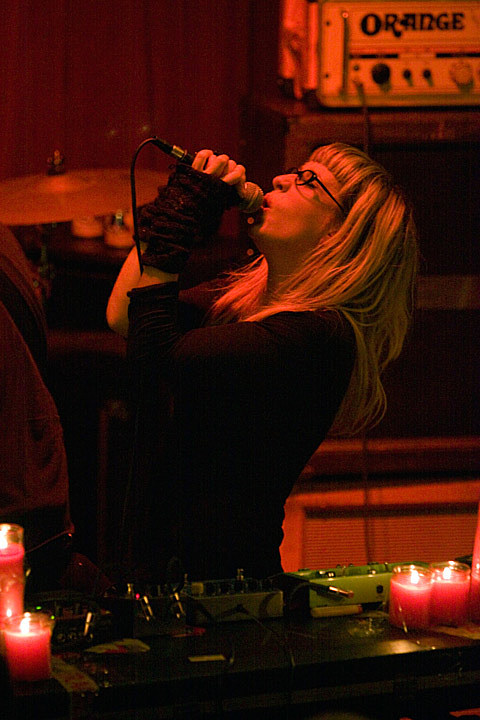 Intercontinental doom destroyers Monarch return to a four-piece configuration with Omens, the band's latest rumbling LP due on Feb 28th via At a Loss. It's their first with Dark Castle drummer Rob Shaffer behind the kit. Shaffer replaces Robert MacManus on Omens, the follow-up to their 2010 release Sabbat Noir which hit via Heathen Skulls and was followed-up with a string of US dates. Stream all of Omens below for the first time.

We recently cornered bassist MicHell Bidegain of Monarch to ask him a few questions regarding the new LP, playing in a band where members are scattered across the globe, the (official) addition of Rob Shaffer to the band, and more. Check out said interview, the album stream, their EU tour dates with Altar of Plagues, and the previously posted video teaser for Omens below.

Who is the current lineup of Monarch? How has Rob Shaffer's addition changed the band's sound?

MicHell Bidegain: The actual line-up consists of Emilie Bresson on vocals/electronics, Shiran Kaidin on guitar, Rob Shaffer on drums, myself on bass, and when possible Stéphane Paulini on second guitar. Rob has definitely been an awesome addition to our sound, because his drumming is just so inventive and interesting, everything sounds better with him destroying his kit. The first time we actually saw Rob play was with Dark Castle, and Shiran and myself we're in awe of his drumming. We were like, this guy would be so perfect for Monarch. Fast forward a couple of years, and here he is... And the guy is just so much fun to hang out with!

What were Monarch's goals for Omens after creating Sabbat Noir? How much of the material was created with Shaffer on board versus when MacManus served as drummer?

We didn't really have any specific goals, other than to make a new album. When writing Omens, maybe we all had a better idea of what direction we wanted to take. In a sense we we're all kind of getting tired of the 'play as slow and low as possible' approach, and wanted to try something different, or at least incorporate different elements into the mix to make the songwriting more varied and interesting for us. Emilie for example, wanted to try more dark ambient type parts, and use more clear vocals as well.
The whole record was written with Shaffer behind the kit. Seeing how at the time, we were all living in different countries (France, US, Australia, Canada), we couldn't really meet up for practice every week, so the only option was to write and record while on tour. So we wrote the new record while on tour in Japan last year. When writing the new album, we were basically living in this club in Osaka called Hokage, where they we nice enough to let us sleep in their bar. Whenever we had a day off, we'd wake up, practice until the bands came in for their sound-check, then we'd go hit the bars, come back after their concert was over, and get back to work. The experience was awesome. Being a million miles away from home, writing a new record in a crazy city like Osaka, constantly submerged in the creative process. When we weren't practicing, we were brainstorming, and everybody involved was really invested in the whole process.

Will Omens be released on vinyl?

Omens should be seeing a vinyl release later in the year.

Sabbat Noir was never properly released in North America, though many were able to get a copy on your last North American tour with Bloody Panda. Any plans to release it in the states?

No plans for a re-release yet. We're thinking of maybe releasing a compilation record featuring Sabbat Noir, along with other out of print material from tour EPs that never saw a proper release either. We'll see if that ever happens...

With 3/4 of Monarch now in North America, are there any plans to gather up the bands for a North American tour in the near future?

We're starting to get to work on a full US/Canada tour for late June/July. Can't wait! Last time we toured the US was such a blast! Hopefully we'll get some studio-time in as well. 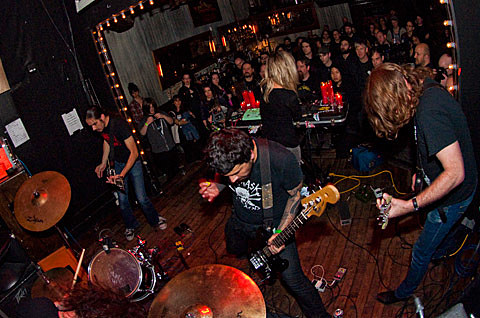 As a resident of Montreal, what do you think are some great Canadian bands that are off-the-radar for US audiences?

Off the top of my head, Ensorcelor, that play killer down-tuned blackened filth and released an awesome LP on Media Tree a few months back, Thisquietarmy, a one-man droning noise/visual extravaganza, Vile Intent, which is like raging old-school power-violence, and Blood Ceremony, that's like a heavy occult mix of Jethro Tull and Black Sabbath. Since part of the new Monarch album was recorded in Montréal, we were able to have Yailen from Ensorcelor, and Eric from Thisquietarmy work their magic on one of the tracks (Transylvania Incantations).

Monarch has been booked as part of their dream tour as the first of three bands, living or dead. Who are the two bands you are supporting and why will this hypothetical tour be so special for you?

Tough question... Hmmm... Disclose and Motorhead. Disclose, because I never got to see them live, and they totally influenced our sound by being so raw and distorted. And Motorhead, well, to see Motorhead every night and hang out with Lemmy.