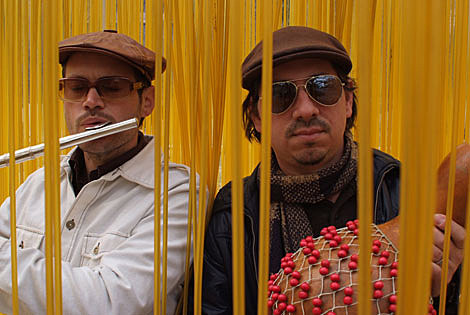 Mondo Mundo Festival, put on by the booking agency of the same name, is happening at Hiro Ballrom Saturday, January 9th. Ocote Soul Sounds, the world jazz/soul-funk group with Adrian Quesada of Grupo Fantasma and Martin Perna of Antibalas (and frequent sideman for TVOTR, Scarlett Johansson, Celebration, Dragons of Zynth and others), headline. The lineup also includes Toshi Reagon & BIGLovely's varied folk-rock, electronica-influenced instrumental jams from Burkina Electric, Lebanese-born singer-songwriter Abaji and DJ Angola. Tickets are on sale. We also have a pair of tickets to give away. More info is below.

Speaking of Antibalas, we just mentioned that Antibalas's Knitting Factory residency would be continuing into 2010, but those shows have been canceled for now (stay tuned for new dates later in 2010).

You can still see Fela! on Broadway though (starring members of Antibalas in the band). In fact, you can see it for free or cheap(er). We're giving away TWO pairs of tickets to see Fela! (in addition to the pair of tickets to the Mondo Mundo Fest), and we have an exclusive discount code that will get you tickets at a reduced rate should you choose to pay for them.

Details on all of that, with a streaming NPR story, a flyer, and more info on Mondo Mundo, below...

TO WIN A PAIR OF TICKETS TO FELA! (date of your choice), e-mail BVCONTESTS@HOTMAIL.COM (subject: Fela) with your first and last name. Two winners will be selected randomly and will be mailed a two-ticket voucher for the show.

TO WIN A PAIR OF TICKET TO the Mondo Mundo Fest at Hiro Ballroom (1/9), e-mail BVCONTESTS@HOTMAIL.COM (subject: Mundo) with your first and last name. One winner will be selected randomly.

RESTRICTIONS:
All prices include a $2 facility fee. This offer is valid through 2/28/10. Not valid for Saturday night performances. Other blackout dates may apply. Each order is limited to a maximum of 8 tickets for this promotion. 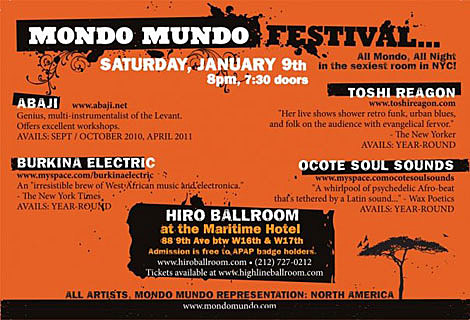 Over the past three years, Mondo Mundo has quickly emerged as one of the leading booking agencies in the loosely termed "international" music scene. Founded by two music industry veterans, Phil Ballman and Mel Puljic, the company has filled the void for representing the more cutting edge "globally-sounding" artists. Their impressive roster represents both indie emerging acts right alongside legendary established ones. Saturday, January 9, 2010 marks their third annual Mondo Mundo Festival with another stellar line-up of "world music" from the fringe. From the psychedelic afro-Latin funk grooves of Ocote Soul Sounds to the angelic voice of Toshi Reagon's urban folk blues to West African electronica outfit Burkina Electric, and Lebanese-born multi-instrumentalist/singer-songwriter Abaji, prepare yourself for a diverse night of genre-traversing sounds.

Ocote Soul Sounds is the psychedelic Latin-funk project of Antibalas' Martín Perna and Grupo Fantasma's Adrian Quesada. If Ocote Soul Sounds' latest album Coconut Rock wasn't hot enough, it now gets the deluxe package treatment with five exclusive new remixes, a full digital booklet and a music video added to the original album. In addition to the original album music, Coconut Rock Deluxe includes a new electro funk version entitled "Electric Cockroach," a honey dipped hip-hop rhythm remix of "Vendendo Saude e Fe" by Adrian Quesada himself, a swinging reggae remix of "Cara de Yo No Fui" by label mates Ancient Astronauts, and other remix exclusives by DJ Obah and Grant Phabeo. The Digital Deluxe Edition of Coconut Rock, comes out on the heralded ESL Music label on December 8, 2009. Get ready for a surefire set from these two multi-talented funksters alongside their special guests.

Toshi Reagon was born in Atlanta, grew up in Washington, D.C., and has been living in Brooklyn, NY, for the past 20 years. Her parents were part of the Freedom Singers, who fought for Civil Rights in the '60s. Her mother was also a founding member of Sweet Honey in the Rock. Her music is powerfully soulful and clearly rooted in folk, gospel and the blues. Her presence on stage is electrifying and irresistible, and it's no wonder--she's been performing for much of her life. Reagon dropped out of college when she was invited to open for Lenny Kravitz on tour. Since then, she's performed with everyone from Pete Seeger to Chaka Kahn, Dar Williams, Elvis Costello, and Ani DiFranco, whose Righteous Babe label she's signed too. Toshi also worked on several projects with her mother and Sweet Honey In the Rock.

Burkina Electric is the first electronica band from Burkina Faso, in the deep interior of West Africa. With its main base in the music scene of Ouagadougou, Burkina Faso's capital, it is, at the same time, an international band, with members living in New York, U.S.A. and Düsseldorf, Germany, as well as in Ouaga. In Burkina Electric's music, the traditions and rhythms of Burkina Faso meet and mingle with contemporary electronic dance culture, making it a trailblazer in electronic world music. Before starting Burkina Electric in 2004, band members Maï Lingani, Wende K. Blass, Pyrolator, and Lukas Ligeti had become close friends as members of Beta Foly, a group that emerged from a workshop led by Lukas and Pyrolator in Abidjan, Côte d'Ivoire, which, among other experiments, created some of the earliest fusions of techno/trip-hop with African traditional music. They will be releasing their new album, Paspanga, out on January 12, 2010 on Cantaloupe Music.

Rounding out the night is Abaji, the Lebanese-born multi-instrumentalist/singer-songwriter. Abaji re-imagines his lost-and-found trans-Mediterranean roots and draws on a wildly inventive "instrumentarium," a deep sense of the global blues, and the five languages and traditions that shaped him. His new album, Origine Orients showcases his unique signature sound perfectly.

Mondo Mundo continues to break molds in the "international music" scene by reaching a wider audience for their acts. In addition to the traditional presenters and venues, they book their eclectic roster at rock venues like The Mercury Lounge (NYC), Slims (SF), and The Great American Music Hall (SF) to name a few. They've debuted groundbreaking US tours for artists like afro-beat master Seun Kuti, Brazilian's hip samba funkster Curumin and now a massive tour run with Bassekou Kouyate & Ngoni ba, Sub Pop's newest signing and foray into global music. Don't miss this opportunity to catch one of the hottest showcases at APAP, because the Mondo Mundo Festival only comes once a year.