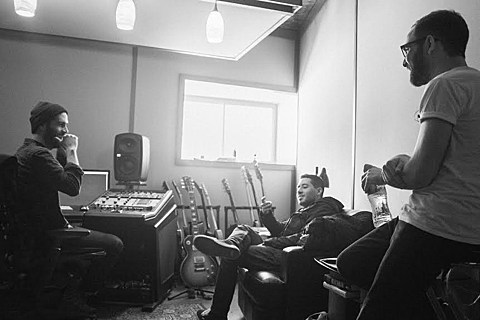 Moneen, Moving Mountains and Prawn are playing a few shows this month in Philly, Brooklyn, and Boston. They're Moneen's first US shows in five years and Moving Mountains' first shows anywhere in two.

Mov Mou already released a split with Prawn ahead of the shows, and now they're releasing one with Moneen too. It has each band covering each other, with Moneen offering up an airy take on "Armslength" off 2008's Foreword EP and Mov Mou doing a stripped-down, partially acoustic rendition of "Great Escape" off 2009's The World I Want To Leave Behind. The songs will be out digitally (on streaming services and retailers) on Friday (12/18) via Dine Alone, but both are premiering below right now. Check them out.

About meeting each other, Greg from Moving Mountains says:

Back in 2009, MovMou was on our first tour out west opening for Say Anything. That's where we first met Moneen, as our green rooms were often put together. That tour felt serendipitous, because Moneen were somewhat forced to spend the majority of their time riding with us, sharing our gear, sleeping in the same hotel beds, as they kept having problems with their van. On top of being thankful that nobody was ever seriously injured in their van during that time, everything almost felt meant to be, that we needed to become friends, and needed to be inspired from one another's music. Those guys definitely helped mold our perspectives as musicians in a very positive way.

And Kenny from Moneen adds:

We first found out about moving mountains on tour with say anything. We were both opening on that tour. We had planned to play more of our straight up Rock songs. As soon as moving mountains started their set we threw our song choices in the garbage. They played these incredibly spacey intense songs that blew us away.
We kind of all agreed that they had nailed what we had been trying to do for so long. Fast forward a bunch of years and here we are doing shows together again and getting to cover one of the songs that originally blew us away. It wasn't a hard choice since all we want to do is rip off moving mountains now anyways.

The Brooklyn show of the tour happens December 19 at Music Hall of Williamsburg. Tickets for that show are still available.

List of all dates, with the new Mov Mou/Moneen covers and the full Prawn split, below...