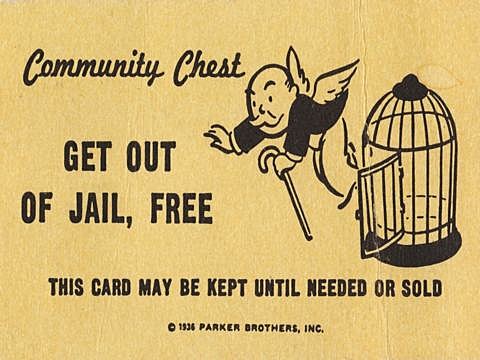 Weird things are happening in the board game world. The Atlantic Wire reports...

Really, nothing is sacred anymore -- not even Monopoly. Because kids' days are filled with obligations and organized activities, young children today are apparently busier than any of their predecessors in history, toy manufacturers like Hasbro are tailoring board games to make them faster to play.

"Hasbro's new Monopoly Empire, in which players compete to amass the most big-name brands, such as Coca-Cola Xbox and McDonald's, can be completed in as little as 30 minutes, compared with the hours that traditional Monopoly could take," reports The Wall Street Journal's Ann Zimmerman. Hasbro accomplished this depressing feat in part by removing the jail, which speeds up the pace and also removes a crucial safe zone in the latter stages of the game.

Here's to future generations of kids who will never know what a Get Out of Jail Free Card is.

PREVIOUSLY: Monopoly replaces the iron with a cat (RIP iron).