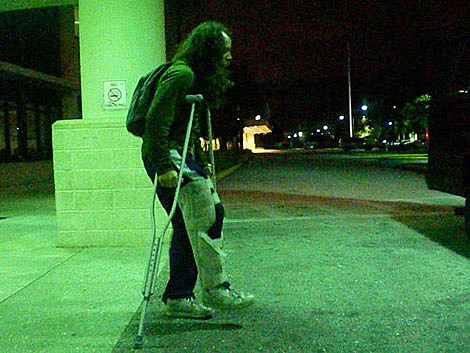 The problem with being a performer known for exaggeration and extreme physical antics is, when something seriously goes wrong, nobody believes it at first. And so it went last night that when Monotonix frontman Ami Shalev called for a doctor barely 15 minutes into his band's headlining set, he was, at first, relentlessly heckled.

"I think we finally managed to make history," Shalev said. The crowd cheered, figuring it would be an announcement about the band's debut appearance south of Orlando.

"After more than 700 shows, I think I finally broke my leg," he continued.

More cheering. This was part of the stunt, right?

"Is there a doctor or paramedic?" he asked.

"Suck it up!" Someone yelled.

But Shalev was obivously in pain. "Fuck you!" he yelled, wincing and grabbing his thigh. "What I need is a doctor or a paramedic, or a wheelchair. Or just a chair." He repeated the request again at least twice.

Confusion then ensued as, yes, there was a doctor or paramedic in the house, who ran to tend to him. A massive bag of ice was produced from behind the bar, and helpers produced an Ace bandage.

Shalev, though, seemed to want to continue the show from a chair, insisting to his handlers and bandmates he could just ice it down. That seemed highly unlikely once the paramedics arrived with a stretcher. Shalev refused to leave on it, but didn't get up either. Nobody from the venue bothered to announce what was going on, instead sending a DJ to the booth to play indie rock as a few people lingered, trying to dance.

Eventually, most of the crowd trickled out. (Some actually demanded refunds. Really? Enjoy your extra $7 or $10, assholes). It was an anticlimactic, deeply disappointing end to what should have been the band's triumphant introduction to South Florida.[Broward-Palm Beach New Times]

The show took place at Respectable Street Cafe in West Palm Beach. Monotonix was in the middle of a short set of dates with Surfer Blood. It's unclear what will happen to the remaining three shows on their tour. More picture of the night are at the New Times.

UPDATE: Pictures from the hospital above, and below with a message from the band about what happened, cancellations, and all tour dates... 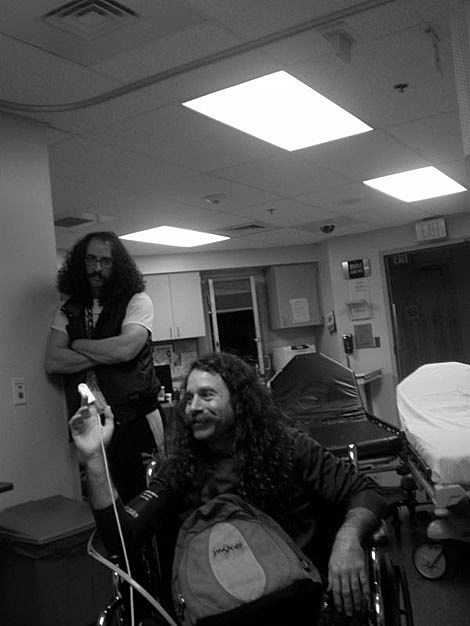 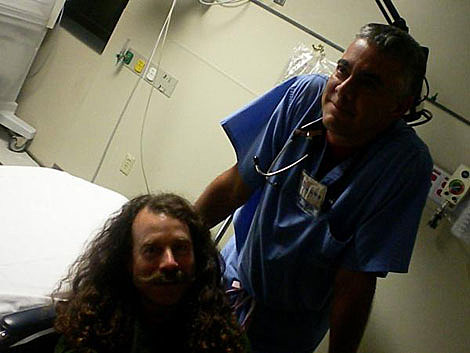 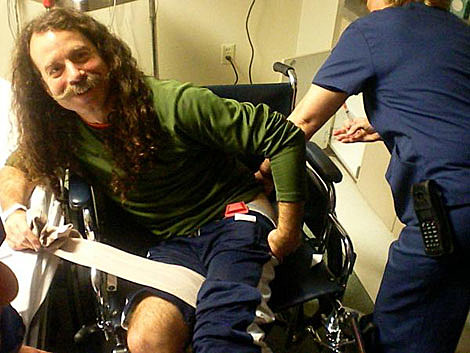 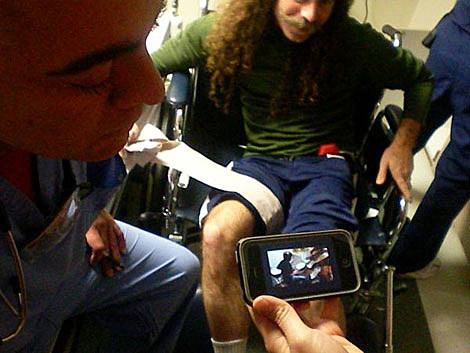 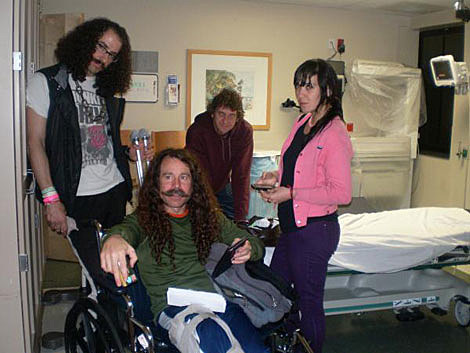 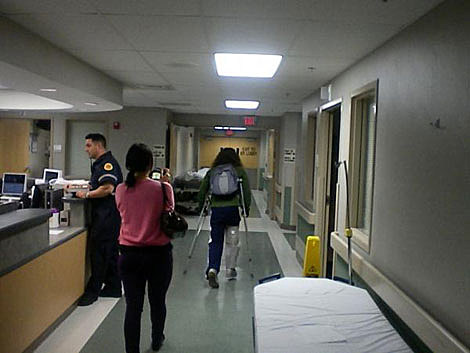 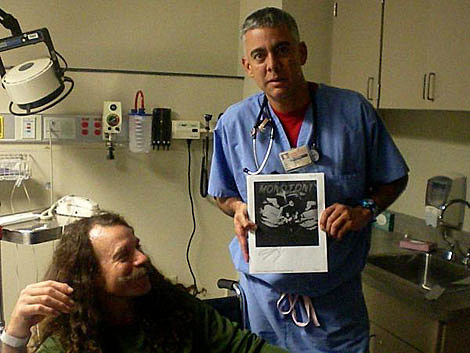 Ami injured leg, Athens show cancelled
during the show in west palm beach, florida we did with surfer blood in "respectable st. cafe" (which was our first southern florida show), Ami had a bad landing on his feet during the first song.
he was on Haggai, then he jumped down, and got a bad pain in his right knee, it's something he's been carrying since a blow he suffered at a show in tel aviv in the summer of 2008.

we kept playing the second song but obviously something was wrong with Ami, and we didn't know if we should stop or not yet. he tried to keep going, but during the third song it was pretty obvious he can't go on after he had to lean on people from the audience to stay standing.
we never stopped a show in 700 shows, but yesterday it seemed like we should.
Ami asked if there was a paramedic or doctor at the audience, and everyone thought it was a joke. even when he laid down at the side of the venue a guy that was helping him (which was a wrestling coach) kept asking us if it was a prank and he's gonna get up and keep going in a sec.
I was holding the ice on Ami's leg and people kept asking: "are you guys selling merch?"
we stopped the show and Ami layed down. an ambulance came and Ami refused to get on it.

we packed our stuff and drove to JFK Memorial Hospital close to Palm Beach and put Ami on a wheelchair.
the doctor showed up asking for autographs and started having the nurses take his pictures with Ami and the band. other nurses kept coming in and out of the room with monotonix show videos playing on their ipods.
the highlight of the evening was the doctor showing us youtubes of his 12 year old son playing drums while Ami is getting pain killer shots to his butt from the nurse.
there was a commercial TV in the hospital room and the bill was tremendous.

we're gonna cancel tonight in Athens, but still try to make it to Charlotte and Asheville to finish the tour properly, and then off to Chicago to record.

Ami is in good spirits, but still can't step on his leg. we're hoping it will be better soon.