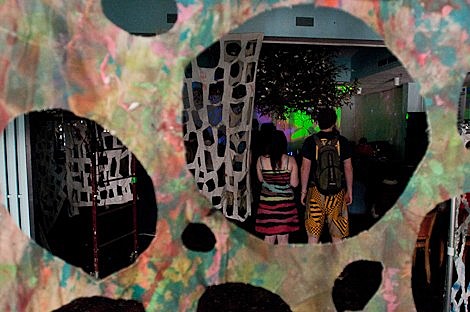 Started by Kid Millions and Bobby Matador of Oneida, People of the North is an ongoing but sporadic outgrowth of that restlessly experimental Brooklyn assemblage. Since the first tour in early 2003, POTn has served as another language emanating from the screaming mouth of the O. It has always included Kid and Bobby, and usually other members of Oneida as well. The entirety of Oneida has performed together under the POTn label at venues including the Frying Pan and the Mercury Lounge.

People of the North has provided compositions that have worked their way into Oneida's most cherished repertoire, including "Up with People" (from Happy New Year) and "Lavender" (from The Wedding).

While there are no clearly defined boundaries separating POTn from Oneida, it might be fair to say that the music tends to be more staunchly devoted to minimalism, repetition, improvisation, and sternness than the wide-ranging efforts of the big brother band.

Deep Tissue was recorded at the Ocropolis in early 2009, with the participation of much of the O. The sessions were deep, and the skies were gray." [Jagjaguwar]

People of the North's Deep Tissue was released by Jagjaguwar in April. There are four songs on the album. You can download one for free above.

Catch People of the North live Friday night at Bowery Ballroom where they'll be opening for Portishead side-project BEAK>. Tickets are still on sale. It's BEAK>'s only NYC appearance, and one of only four they're playing in the U.S. Another one is Saturday at ATP upstate. The other two are in California (and they're all listed below).

Not leaving town this weekend and can't make it to ATP? Todd P and friends present another reason to not feel so bad, and Oneida (who were a big part of ATP NY in 2009), are involved in that too. Oneida will headline a 17+ band lineup (that also includes Oneida side-project Man Forever) at Monster Island on Saturday. The "Monster Island Block Party" kicks off at 2pm and is free. Full lineup and more details with all Oneida and BEAK> dates, below...