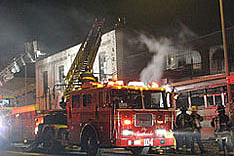 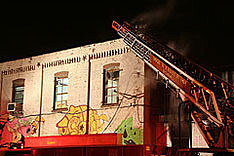 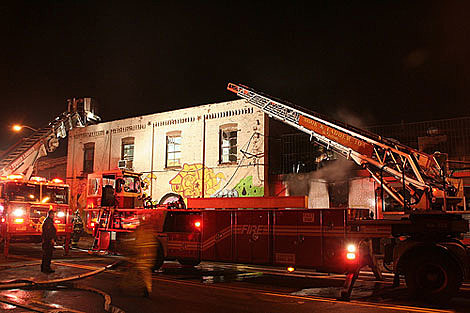 "Around 1:30 a.m. alerts came in about a "fire in a factory/restaurant" on Kent Avenue (map) in Williamsburg. Word is coming in now that the "early morning fire gutted a landmark Northside diner, causing damage to an adjacent arts collective at Kent Avenue and Metropolitan." The establishment suffering extensive damages is the former Miss Williamsburg Diner (more recently 718), with the two-story building next door getting less scathed.

While the diner may be a long time fixture in the neighborhood (even making a cameo in Charlie Kaufman's Synechdoche, New York), the neighboring building known as "Monster Island" has recently drawn crowds through promoter Todd P. It also houses the Live With Animals and Secret Project Robot galleries, Mollusk surf shop, and possibly some band practice spaces". [Gothamist]

Hopefully nobody was hurt - doesn't seem like they were.

Todd P, shortly after I posted, added the good news that "through a stroke of very good luck, Monster Island survived this fire unscathed. Thanks everyone, especially the FDNY, for your help and your concerns!" He also told me that the damage was even just limited to a kicked in door and a broken window.