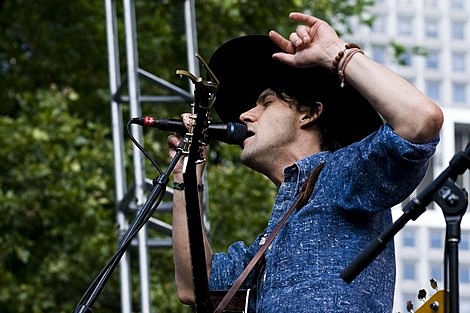 Monsters of Folk - comprised of Bright Eyes' Conor Oberst and Mike Mogis, My Morning Jacket's Jim James and singer/songwriter M.Ward - will be releasing their first collaborative album on September 22nd. The self-titled effort was recorded in Malibu, CA and Omaha, NE, and produced by Mike Mogis. Although these critically acclaimed artists have shared the stage before, this album marks their first recorded output as a band. The record will be released in North America on Shangri-La Music, and internationally on Rough Trade (UK/Europe), Spunk Records (Australia/New Zealand) and P-Vine Records (Japan). All four members play every instrument on the album, supplying everything from drum kills to cascading backing vocals.

Of the group, Conor Oberst is one of the members who's touring this summer. That includes some dates with AA Bondy. As you can see above (and we've mentioned a few times already), Oberst just played 4th of July in NYC's Battery Park. He also played Friday at Toad's Place in CT.

"There's nothing that the road cannot heal," Oberst sang Friday night at Toad's Place in New Haven, leading his backing quintet, the Mystic Valley Band, through a spirited version of "Moab."

Clad in a traditional Mexican shirt, necklace and black sombrero -- a gigantic hat nearly as large as the UFOs often spotted in Tepoztlan -- the singer and guitarist strummed hard and made wild gestures, sometimes pointing off into the distance." [Hartford Courant]

M. Ward is also on the road. His summer stops include XX Merge in July and a free Central Park Summerstage show (with the new Yuka Honda/Dougie Bowne/Nels Cline/Mike Watt band opening) on August 1st.

Jim James Yim Yames and My Morning Jacket are currently taking some time off. This summer James will be releasing a George Harrison tribute EP called Tribute To, which is available now for download and presale through his site. The record is under the name "Yim Yames" and hits stores on August 4th. A portion of the proceeds of this album will go to Woodstock Animal Sanctuary.

A widget to preview Tribute To, with both album tracklists, below...