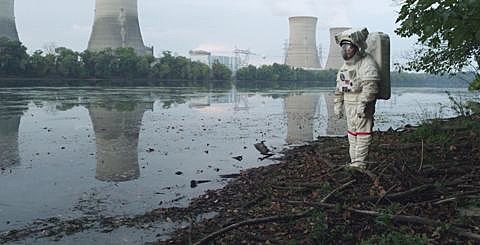 Every year at M for Montreal, there is an all-Francophone showcase held at Cafe Campus on Saturday afternoon. While most of these groups will never tour below the Canadian-American border, I always find them interesting, a window into a musical world most English-speaking music listeners never hear about. There's usually a fair amount of artists there who drift into Michael Buble territory, but M usually programs a couple more adventurous picks as well.

This year, one of the best acts at the Franco-M showcase (and best of the new bands at M in general) was Montreal duo Forêt whose gorgeous, otherworldly sound isn't miles away from Blonde Redhead or Stereolab. The band released their self-titled debut back in March and you can stream the whole thing below. Recommended.

The band have just made a video for LP standout "La Cage" which the band filmed in Centralia, Pennsylvania, where a 50 year old fire still burns underneath the labyrinth of coal-mines. Almost no one lives there anymore. The video, directed by Hervé Baillargeon, has the band exploring this foreign territory as astronauts, and the suits they wear are the actual ones used Alfonso Cuarón's hit film Gravity. There's a genuine spooky vibe to it, and we've got the premiere of the video in this post. Check it out below...