Monty Python -The Meaning of Live 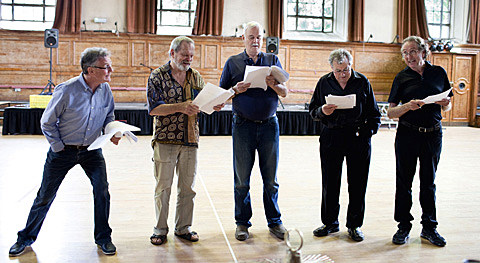 The five surviving members of Monty Python will appear in NYC to celebrate the 40th anniversary of Monty Python & the Holy Grail as part of the 2015 Tribeca Film Festival. John Cleese, Terry Gilliam, Eric Idle, Terry Jones and Michael Palin will all be on hand for the Holy Grail screening which happens April 24 at Beacon Theatre. Tickets for that go on AmEx presale March 23 with the public on-sale beginning March 28.

offers unprecedented access into the personalities, relationships and history that made the Pythons into a global phenomenon. The film allows the comedic geniuses themselves to reveal the impetus of some of their most well-known pieces and provide an in-depth history of Python's stage work as they prepare for their final live show at The O2 in London.

Stay tuned next week for screening info. The Tribeca Film Festival runs from April 15 - 26. Tickets to most TFF screenings go on AmEx presale on March 31 at 11 AM with the general on-sale starting on April 6 at 11 AM. Festival passes and some ticket packages are on sale now.