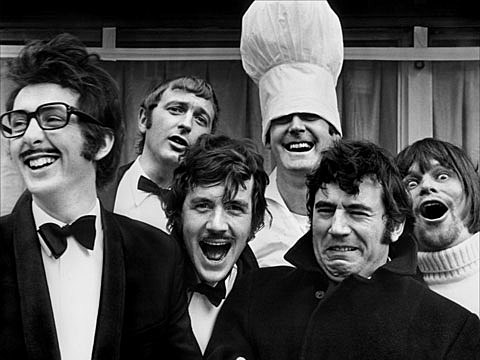 On October 15th 2009 your man Klaus had what can only be described as a "living daylights wet dream nerdgasm." For on that evening of evenings John Cleese, Terry Gilliam, Eric Idle, Terry Jones, Michael Palin, and even the late Graham Chapman reunited at the Ziegfeld Theater in NYC to celebrate the 40th Anniversary of the creation of comedy troupe Monty Python. The reunion event included a screening of the theatrical version of the IFC original documentary Monty Python: Almost the Truth, a presentation of a BAFTA award, and a Q&A with the cast (including Carol Cleveland). What brought the evening to a completely dangerous and unheard of tier of nergasmness was the fact that Klaus-Mega-Idol Steve Coogan decided to sit next to me (like, elbow-to-elbow next to me) and the fact that every single Python was sitting directly in front of me. For the first time in my life, I almost fainted because of the presence of celebrities. It was one of the greatest evenings of my wasted life.

No comedy troupe has divided the populace into a "love column" and a "hate column" more than Monty Python. People either categorically love them or categorically hate them; I have yet to hear or see the words, "Monty Python? Yeah, they're ok." So as a person in the "love column" it is with stupefied joy that I tell you that Monty Python will be reuniting for a live stage show which will take place at the O2 Arena in London in July of 2014. The show has a working title of "One Down, Five to Go" which is no doubt a reference to deceased 6th Python Graham Chapman. This show will mark the first time the group has performed together on a British stage in over 40 years. Much like their TV show, movies, and other stage performances, this performance will feature new bits, classic bits, music, as well as their signature animations. At the moment it is being billed as a one-off performance, but the idea of a tour is not too far fetched. It will be filmed, so if the idea of future performances gets shit-canned at least people will still get to see it.

I realize this has nothing to do with New York. Or even the United States of American. But here's hoping for a successful London show and an eventual residency in New York!