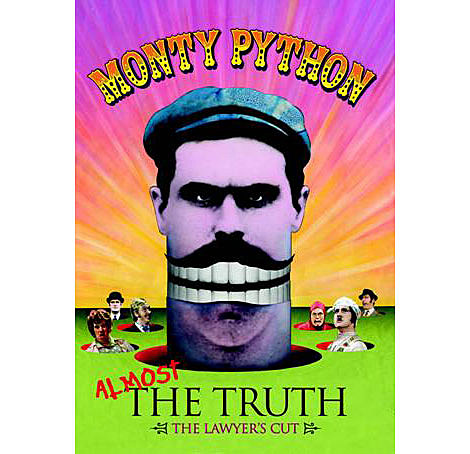 A few nights ago I had a dream that my personal favorite Monty Python cast member Michael Palin approached me after I had finished a speaking engagement and asked me to join a reunited Python cast for a world tour. I declined the offer because I was apparently about to head out on tour with Radiohead as their new drummer. Alas, that was only a dream and my, our, only opportunity to see the entire reunited Python cast in the flesh will be Thursday October 15th at the Ziegfeld Theater (full details below). Limited tickets for this Monty Python 40 Anniversary Reunion and presentation of a BAFTA Special Award went on sale and cost $150. If you would like to purchase tickets, shoot an e-mail to Screening@baftaeastcoast.com. If successful, you'll be e-mailed a link to a ticket registration site and you can proceed from there. Good luck!

There will almost certainly be squabbling at the reunion. "They love getting angry and shouting at each other," Ben Timlett, a director and producer of the documentary, said recently. There were (and are) genuine differences among the Pythons, which they sometimes exaggerate for comic effect now, and there have been so many books, articles and previous documentaries that there is no truly reliable account of practically anything associated with the group. Partly for this reason, a number of the Pythons were initially reluctant to take part in the documentary.

"I was very dubious about it," Mr. Cleese said. "I thought we had flogged this horse to death -- way past death, in fact." [NY Times]

On October 18th, a few days after the BAFTA event, you can catch the premiere of the 6-party documentary series Monty Python: Almost The Truth: The Lawyer's Cut on IFC. With rare archival footage, new interviews with all living cast members, wonderful archival interview footage of the late Graham Chapman, as well as insights by comedy 'experts', the series, which runs from October 18th - October 23rd, is as thorough as can be. I've seen the first three episodes so far and am amazed at how truly engaging and informative the documentary is. If you can't see it when it airs on IFC, keep in mind that you can get it on DVD and BluRay on October 27th.

In other somewhat Monty Python related news, there's a show happening at Town Hall from October 6th - October 10th called An Evening Without Monty Python. Directed by original Python cast member Eric Idle, these shows consist of contemporary comedians and actors performing classic Python skits. I've read many positive reviews of the LA shows, but as a fan I don't think I'm alone in being a LITTLE skeptical about this. I feel like it'd be like seeing a cover band. Though, the Australian Pink Floyd is a cover band and they consistently sell out gigantic theaters all over the world. Maybe people don't mind a decent forgery? Anyhow, if you're feeling adventurous tickets are currently on sale. Video below.

Eric Idle Talks About An Evening Without Monty Python