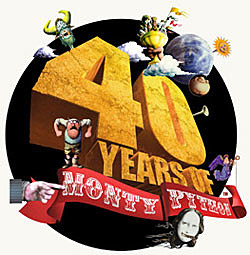 How do you get some of the Tri-State area's biggest nerds to yell "Holy shit!", drop their Xbox 360 controllers and head for the door at record speeds? Tell them that IFC and BAFTA are reuniting the entire MONTY PYTHON troupe for one night only in NYC in celebration of their outstanding contributions to television and film. On October 15th, John Cleese, Terry Gilliam, Eric Idle, Terry Jones, Michael Palin, and even the late Graham Chapman will be at the Ziegfeld Theater in NYC to celebrate the 40th Anniversary of the creation of comedy troupe Monty Python. The reunion event includes a screening of the theatrical version of the new IFC original documentary Monty Python: Almost the Truth (The Lawyer's Cut), a Q&A with the cast, as well as a special BAFTA Award presentation.

Right now ticket info for this event is scarce but word on the street is that SOME tickets will be available at www.ifc.com in mid-September.

The version of Monty Python: Almost the Truth (The Lawyer's Cut) that will be shown at this preposterously awesome event is actually a condensed version of the larger 6-hour Monty Python documentary of the same name that will be shown in 1-hour installments on IFC from October 18 - October 23 at 9:00pm ET. It is part of IFC's Python-a-thon, a week long Monty Python celebration that also includes showings of Python film classics Monty Python and the Holy Grail, Monty Python's Life of Brian, and Monty Python Live at the Hollywood Bowl. The episode guide for this 6-part series is below.

MONTY PYTHON - ALMOST THE TRUTH (THE LAWYER'S CUT) - EPISODE GUIDE
THE NOT SO EXCITING BEGINS
(Air Date: Sunday, October 18 at 9:00pm ET/PT)
The birth of Monty Python. Join members as they tell the tale of how their lives and careers began Post-WWII to the culmination of Monty Python's Flying Circus.
Interviews with Terry Gilliam, John Cleese, Michael Palin, Terry Jones, and Eric Idle.

LUST FOR GLORY
(Air Date: Thursday, October 22 at 9:00pm ET/PT)
On the heels of 'Holy Grail' and its success, the Python Gang reflects on their next misinterpreted and controversially banned film, The Life of Brian.
Interviews with Terry Gilliam, John Cleese, Michael Palin, Terry Jones, and Eric Idle.

My Favorite Monty Python Scene of All Time