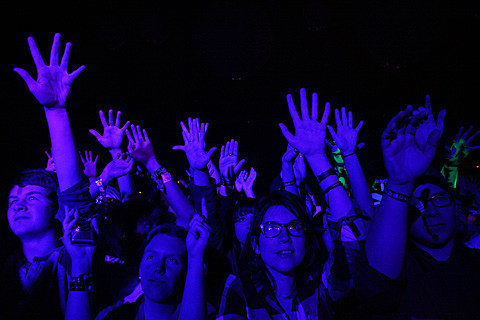 Moogfest, which is becoming one of the most intriguing US music festivals, is returning to Asheville, NC this year on October 26 and 27. Like in past years, the festival includes some legends like Thomas Dolby and GZA performing Liquid Swords (like he is in NYC and other cities), some of our favorite newcomers like Julia Holter, Trust, and Disclosure, electronic heavy hitters like Orbital, Four Tet, Squarepusher, Richie Hawtin, Mouse on Mars, and Prefuse 73 with Teebs, in addition to a diverse list of other artists like Killer Mike, El-P, The Magnetic Fields, Explosions in the Sky, Primus, Santigold, Divine Fits, Actress, Pantha Du Prince, Bear in Heaven, and more. Tickets for this year's fest go on sale Friday (8/10) at noon. The initial lineup is listed below.

Orbital, who released their new album, Wonky, this year, which featured a track with Zola Jesus, have a few other North American dates this year (still none in NYC though).

For Divine Fits, the new band featuring Britt Daniel (Spoon), Dan Boeckner (Wolf Parade/Handsome Furs), and Sam Brown (New Bomb Turks), who recently made their live debut in Austin, Moogfest is one of the few shows they've got scheduled this year, including the Chicago show they played last night (8/5) and an upcoming NYC show.

Moogfest 2012 lineup is listed below.