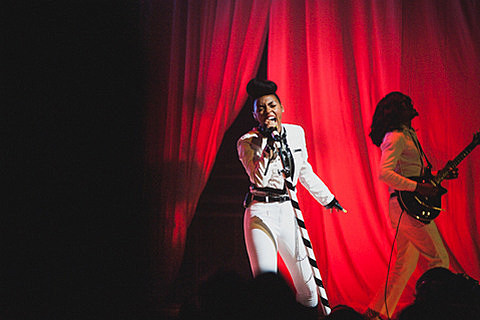 As discussed, Moogfest returns to Asheville, NC from April 23-27, and since we last spoke, more additions to the lineup have been made. Keith Emerson, who was already scheduled to speak during the daytime program, was added as a nighttime performer as well, in addition to Q-Tip, El-P, Saul Williams and more. Nile Rodgers, whose band Chic is performing at night, was added as a daytime speaker, as was Janelle Monae who will be "in conversation with her producers."

Updated flyer and more info on the daytime panel updates, below... 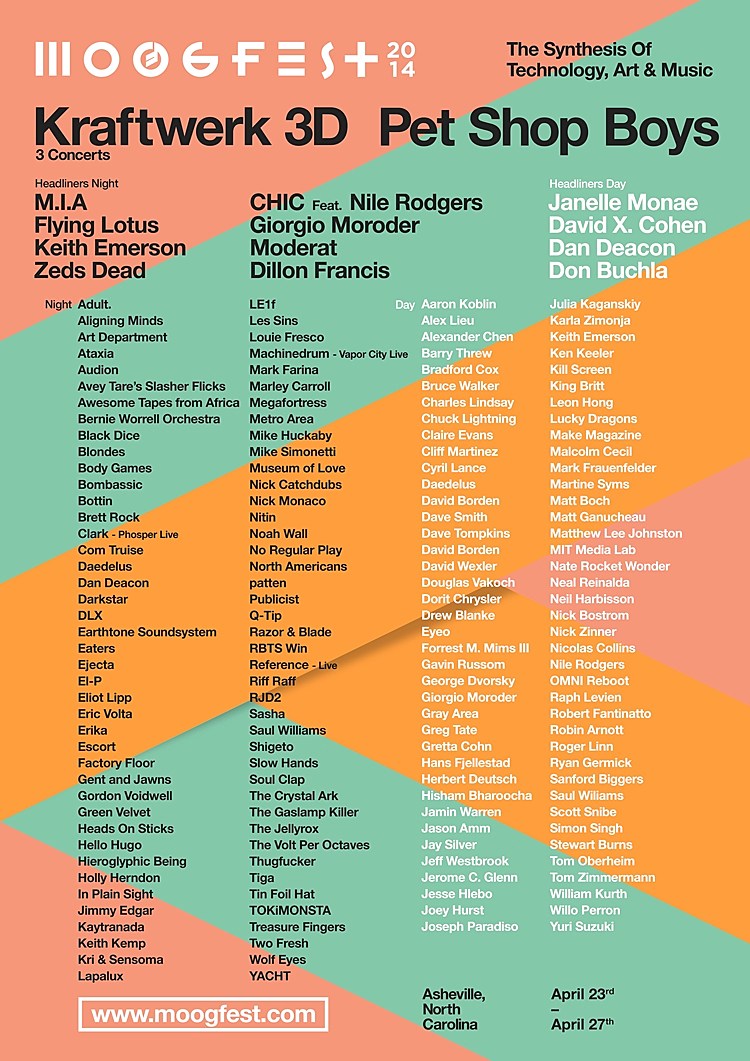 The Future of Creativity
World-renowned futurists, philosophers and artists tackle the big questions: What will art look like and sound like 20, 50, 100 years from now? How will it be made and how will it be consumed? What will be the tools of creative expression in the future? Three keynote addresses by Oxford University philosopher Nick Bostrom; Jerome C. Glenn, CEO of the Millennium Project; and bioethicist, transhumanist, and futurist George Dvorsky.

Dance, Dance, Dance to Let's Dance: A Masterclass by Nile Rodgers
For the first time ever, one of music's greatest producers will reveal the intimate details behind all of his biggest recordings. We'll listen to a selection of his classics from beginning to end, and after each Nile Rodgers will tell us the stories behind each one, from inspiration to songwriting to collaboration to recording, pulling back the curtain on what goes into making timeless hits with David Bowie, Daft Punk, Diana Ross, Madonna, Chic, and more.

The Pioneers of Electronic Music Instruments
Don Buchla invented one of the first modular synthesizers. Roger Linn invented the drum machine. Tom Oberheim founded four electronic instrument companies. Dave Smith is the "Father of MIDI". David Borden is one of the earliest composers of electronic music. All will be sharing their histories and discussing the inspirations for the inventions that changed the course of music.

Innovators In Electronic Music
In-depth discussions with four geniuses who forever changed the sound of music. Herb Deutsch, an early collaborator with Bob Moog, performs a musical talk "From Moog to Mac". Malcolm Cecil built synthesizers for Stevie Wonder and invented T.O.N.T.O., the first multitimbral polyphonic synthesizer. Electronic music pioneer Giorgio Moroder brought the synthesizer into film music. Plus Dave Tompkins, author of How To Wreck a Nice Beach, surveys the history of the vocoder, from World War II espionage to the auto-tuning of pop music.

The Math and Science of The Simpsons and Futurama
Simon Singh, author of The Simpsons and Their Mathematical Secrets, leads the creator of Futurama David X. Cohen, plus Futurama/The Simpsons writers Stewart Burns, Jeff Westbrook and Ken Keeler (who happens to have a PhD in applied math from Harvard and holds a Masters degree in electrical engineering from Stanford), through the mysterious math and science riddles weaved into to countless episodes of two of the greatest TV shows ever, with screenings of key scenes.

Sounds of Space
Astrophysicists, scientists and artists discuss the important research on sound in space. Questions about art and music for this world and beyond with University of Iowa's Department of Physics and Astronomy's William Kurth; the Search for Extraterrestrial Intelligence (SETI)'s Artist In Residence Charles Lindsay, more.

New Forms presented by MIT Media Lab
The MIT Media Lab is an interdisciplinary research laboratory devoted to projects at the convergence of technology, multimedia and design. Professors and students will present their new research, observations and innovations, hosted by Professor Joseph Paradiso, director of the Things That Think Consortium.

Google and the Future of Audio
Come hear firsthand accounts of Google's foray into the intersection of music and technology from members of the Android, Creative Lab, Data Arts, and Doodle teams. Witness and engage in a dialogue about the challenges, triumphs, adventures, and aspirations of mixing sounds and code. With Ryan Germick, Leon Hong, Joey Hurst, Aaron Koblin, Raph Levien, and Alexander Chen.

A Talk with The Electric Lady
The ArchAndroid herself, Janelle Monae, takes us on journey through her sci-fi universe, filled with psychedelic soul music and a dystopian futurism, along with her fellow voyagers Nate Rocket Wonder and Chuck Lightning.

Music Makers, presented by MAKE Magazine
In the spirit of Bob Moog, music lovers and crazed inventors have created new instruments from the oddest materials, and MAKE Magazine invites everyone to tweak, hack, and bend technology to their own will. Presentations and performances, hosted by MAKE's editor Mark Frauenfelder, with Forrest Mims, author of Getting Started in Electronics; composer Nicolas Collins, author of Handmade Electronic Music: The Art of Hardware Hacking; Drew Blanke aka Dr. Blankenstein, mad scientist of analog synthesizers and atari punks; Jay Silver, founder of Makey Makey; and hacker/inventor Tom Zimmerman.

Science Fiction & the Synthesized Sound, presented by OMNI Reboot
Turn on the radio in the year 3000, and what will you hear? When we make first contact with an alien race, will we--as in Close Encounters of the Third Kind--communicate through melody? If the future has a sound, what can it possibly be? OMNI Reboot has assembled a crack team of future dreamers to answer these, and many more, questions. We will picture the mundane realities of the future, provide a soundtrack to science-fiction landscapes, ponder what science fiction film music tells us about our expectations for tomorrow, and hazard some guesses at the musical aesthetics of extraterrestrials. With writer Martine Syms, artist Neal Reinhalda, musician King Britt, astronomer Doug Vakoch, and OMNI Reboot editor Claire Evans.

The Nature of Creativity, presented by Afropunk
Where do artistic notions begin -- and where do they end? What are the tools of creativity, and who are its models? A frank discussion about what it means to be a creative being in a modern world amongst three AFROPUNK originals, artist Sanford Biggers, writer/critic Greg Tate and poet/performer Saul Williams. Plus a screening of Sanford Biggers' groundbreaking The Triptych documentary series.

Sonification and Cybernetics
Can you visualize music as data? Professor Bruce Walker of Georgia Institute of Technology's Sonification Lab discusses new technologies that illustrate information with sound. Can you see colors as sounds? Contemporary artist Neil Harbisson was born with the inability to see color. With a prosthetic device called an "eyeborg," he can now hear the spectrum and create symphonies out of everything he sees, and has become the planet's first human cyborg. Harbisson will perform live and talk about the launch of the Cyborg Foundation, a nonprofit organization that aims to help people become cyborgs and promote cybernetics in the arts.

What Does Play Sound Like? Presented by Kill Screen
From the wakka wakka of Pac-Man to the immersive soundscapes of Grand Theft Auto, sound design has been one of the unsung heroes of games. Videogame arts and culture company Kill Screen is bringing together some of the best minds inside and outside games including Daedalus, Matthew Lee Johnston, Matt Bock, Robin Arnott, Karla Zimonja and Gretta Cohn, to talk about creating interactivity with sound.