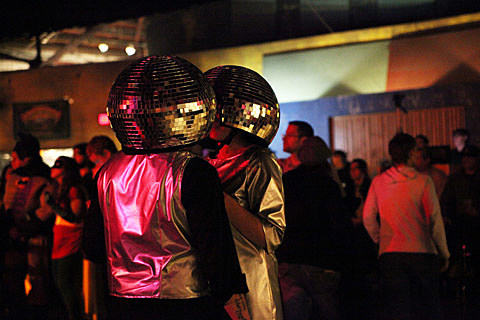 As discussed, Moogfest is returning in 2014, and going down for five days instead of its usual three, from April 23-27 in Asheville, NC (where Mountain Oasis which Tourist played just happened). While the festival hasn't announced any of it's performers yet, they have announced the initial round of speakers for their daytime "innovation conferences" which includes musicians Laurie Anderson, synth pop pioneer Giorgio Moroder, film composer Cliff Martinez (Drive), Emerson Lake & Palmer keyboardist/first person to tour with a Moog synth Keith Emerson, and Claire Evans from YACHT; as well as veritable Who's Who of electronic music innovators: drum machine designer Roger Linn (creator of popular '80s drum machine LinnDrum) and Oberheim Electronics' Tom Oberheim among them. Full initial speaker announcement below. Tickets for the fest are on sale now.

Giorgio Moroder, who re-entered the public consciousness this year with his contribution to the new Daft Punk album and his first-ever live DJ set, is also planning a Las Vegas stage show. He told The Guardian:

[It's] a permanent show, based on disco ... I would do the DJing, but maybe before me we have another famous DJ, maybe somebody after. We of course have a ball, dancers in a cage: recreate Studio 54, and have it in Vegas, Macau, London.

Of course I wouldn't just use my own songs - there are so many great disco songs, Chic and all those guys - and I would do probably an hour and a half. We're thinking of starting first in Vegas [but] it will probably be a bit like Blue Man Group - they have a franchise. We might even talk to the Cirque De Soleil team.

I would be playing, and then maybe later on if we had a franchise I would do one a week, or a month, and then a famous DJ would take over. And now you have so many great DJs that I don't think there would be any problem finding the right one.

Laurie Anderson
Musician, composer, pioneer in electronic music and one of the great experimental performance artists.

Cliff Martinez
Composer best known for his epic and haunting film scores, which include 'Drive', 'Only God Forgives', 'Contagion', 'Solaris' and 'Traffic,' plus a collaborative score with Skrillex for 'Spring Breakers.'

Jerome C. Glenn
Co-founder and Director of The Millennium Project, a renowned expert on Future Studies.

Dr. Nick Bostrom
Futurist and philosopher at the University of Oxford. Director of the Future of Humanity Institute and the Programme on the Impacts of Future Technology.

George Dvorsky
Futurist concerned with the ethical and sociological impacts of emerging technologies.

Dr. Joseph Paradiso
Associate Professor at MIT Media Lab's Media Arts and Sciences program and Co-Director of the Things That Think Consortium, which examines the extreme future of embedded computation and sensing.

Bruce Walker
Associate Professor at the Schools of Psychology and Interactive Computing at the Georgia Institute of Technology.

Charles Lindsay
Photographer and artist, is the first of its kind, Artist in Residence at the SETI (Search of Extraterrestrial Intelligence) Institute.

Hans Fjellestad
Director, producer, writer and editor of the 2004 documentary 'Moog' and producer and writer of 2009's 'The Heart Is A Drum Machine.'

Herbert Deutsch
Composer, educator and inventor. Professor Emeritus of Electronic Music and Composition at Hofstra University. Collaborated with Bob Moog in the development of the Moog Synthesizer in 1964.

Dave Smith
Engineer and musician. Known as the "Father of MIDI" for his role in the development of MIDI.

Keith Emerson
English keyboardist and composer. Founder of Emerson, Lake and Palmer. Acknowledged as one of the most technically accomplished keyboardist in rock history.