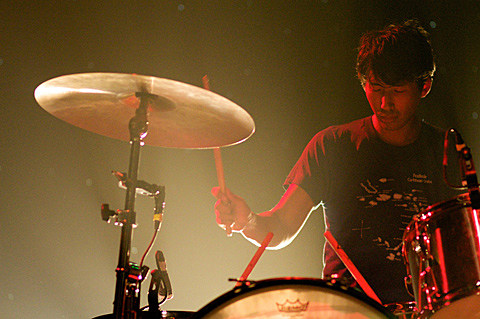 There is still little known about Deerhunter drummer Moses Archuleta's new solo project, Moon Diagrams, other than that he is one of the support acts on Ariel Pink's upcoming tour (but not the NYC date) and was scheduled to open for Julia Holter and Hundred Waters when their tour hits NYC on Friday (8/31) at Bowery Ballroom, but he is no longer listed on Bowery's site (Silent Drape Runners is instead). He is, however, listed on Todd P's site as one of the artists playing 285 Kent TONIGHT (8/30) along with Hamish Kilgour (of The Clean) and Hamish's fellow New Zealanders Team Ugly, plus Mas Ysa, The Lindseys, and DJ Bruno Coviello (of Light Asylum). Admission for this all ages show is $7 at the door, and doors open at 8 PM.

Back in 2009, Moses spoke about why he didn't have any solo material, saying:

It's not like I haven't had opportunities to do it, but it isn't as natural for me as it is for Lockett or Bradford, who have been recording themselves since high school. I'd need to decide pretty pointedly that that's what I wanted to do before doing it.

He must have finally decided what he wants to do then, and you can head to 285 Kent tonight to see what he came up with. If you caught Moses DJing at Highline Ballroom on New Year's Day (1/1/12), maybe he dropped a glimpse of what influenced the direction he'll be going in?