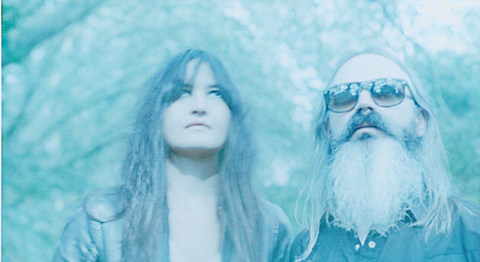 Moon Duo's new album, Shadow of the Sun, is out March 3 and the band have just released the video for first single "Animal" which stars eccentric pro skater Richie Jackson who also directed and edited the video. In it he proves you don't need a skateboard to skate, you just need an old computer keyboard, or a bumper protector or a spare silver serving tray that might just be laying around somewhere you happen to be. Watch till the end for a cameo from Saturday Night Live's Kyle Mooney. It's definitely worth checking out and you can do so below.

Around the release of their album, Moon Duo will be hitting the road for an extensive world tour that starts in North America, including NYC at Rough Trade on March 9. Tickets for that show go on sale Friday (1/16) at noon. All tour dates are listed, along with the "Animal" video, below...