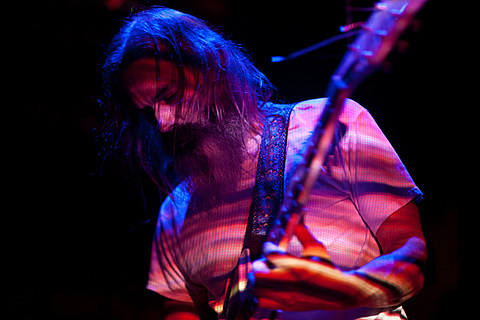 As mentioned, Moon Duo will be back this spring with new album Shadows of the Sun. The band made the record in their new home base of Portland, OR and it's another fine addition to their canon of pop-n-drone releases. You can check out first single "Animal" if you haven't already. Before we get to next year, Moon Duo sent us their list of 10 favorite things from 2014. Most are music-related, but there's art and legislation in there too, with commentary as well.

Moon Duo just played BYM Records' fifth anniversary party in Santiago, Chile and are on board for SXSW 2015 this spring. While we wait for other dates to emerge, check out MD's Best of 2014 list and that new song, below...

Dead Moon, live at the Crystal Ballroom - Portland, OR
Still the best. Perfect way to start the year.

Hookworms - The Hum (Weird World)
Played loud enough through broken speakers and it's almost like being at a Hookworms show. Good ol' rock 'n' roll.

BYM Records 5th Anniversary Party - Santiago, Chile
This was a really memorable show, visiting South America for the first time, playing with some of the best bands in Chile, or anywhere: Föllakzoid, The Holydrug Couple, La Hell Gang.

Zero: Countdown to Tomorrow, 1950's-60's (Guggenheim Museum)
The best museum exhibit of the year for me. Turned me on to Heinz Mack.

Herbie Hancock - Possibilities (book)
The best new music book I've read this year. Not on the same level as Miles by Miles Davis, but a thoroughly enjoyable and frank memoir for Herbie fans.

Semina 1955-1964: Art Is Love Is God (catalogue, Boo-Hooray)
I missed the exhibit but this catalogue is a real treasure. Full-color reproductions of every page of every issue of Wallace Berman's hand printed, mail-art magazine, Semina. I love Wallace Berman.

Listen Up Philip (Alex Ross Perry) / Ida (Pawel Palikowski)
I couldn't decide between these two films. They're so different, yet somehow push all the right buttons for me.