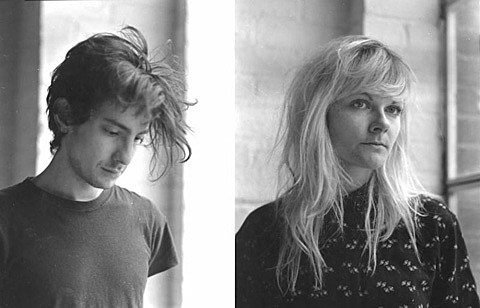 Moon King's new album, Secret Life, is out next week via Last Gang. The duo of Daniel Woodhead and Maddy Wilde have grown a lot, musically, since their last record and Secret Life is a much more nuanced work, with baroque and electronic elements woven into their dreampop sound. Check it out for yourself -- you can stream the whole thing now, via Fader, below.

The band's tour with Doldrums (aka Daniel's brother Airick) -- Moon King have their own set and play as part of Doldrums as well -- hits NYC next week, playing Mercury Lounge on April 17 (tickets) and Baby's All Right on April 18 (tickets). We're also giving away a pair of tickets for the Baby's show on Facebook.

Doldrums, meanwhile, have just shared the video for "Loops," directed by Lily X, which is one of the standout cuts on his very good new album, The Air Conditioned Nightmare. That album is out now via Sub Pop and can be streamed below, as well.