DOWNLOAD: Handsome Furs - "What About Us" (Diamond Rings Remix) (MP3)

Spencer with Wolf Parade at Sasquatch 2011 (more by Josh Darr) 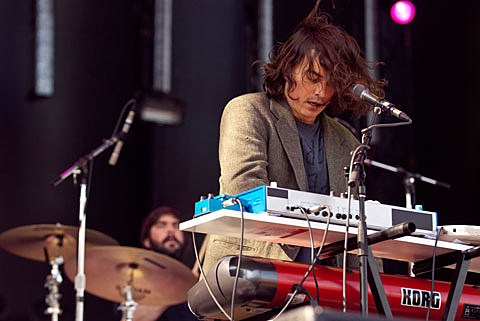 Spencer Krug will take his Moonface project on a previously announced tour which kicks off in July and runs through early August. As mentioned, the tour hits NYC on July 20 at Mercury Lounge. Tickets are still available. If you miss him the first time around, Moonface will return to NYC on August 13 at Glasslands. No opener has been announced for either show yet. Tickets for the Glasslands show are also on sale now.. UPDATE: Moonface is NOT playing Glasslands, and never was.

Handsome Furs' new album Sound Kapital comes out June 28 via Sub Pop. It's streaming now on KCRW. Its first single "What About Us" was remixed by fellow Canadian Diamond Rings. Grab the MP3 above.