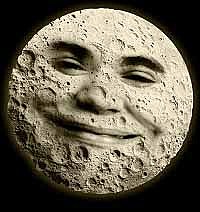 I actually came across this other band named Moonface (from Providence, Rhode Island) while looking for info for our last Moonface post. Moonface, the one we were writing about, is the new Spencer Krug project. At first I thought maybe Spencer (of Wolf Parade fame) had accidentaly used a band name that was already taken, but then I saw that this other Moonface appear to be even newer. They haven't even played one show yet, have been on Twitter less than two months and so for only have demos posted on their BandCamp. They need to change their name (and do a better job of Googling).

Spencer's Moonface released an EP in 2010 via Jagjaguwar (announced in 2009) and is now well known to Google and the indie rock world. To make matters worse (and the reason I'm writing this post in the first place), the Rhode Island band is confusing people and even getting booked by people who think that they're booking Spencer. Not only is Spencer NOT playing Glasslands on August 13th, neither is the Moonface from Rhode Island since Glasslands realized that was who they accidentally booked to headline the Saturday night show which is now cancelled.

Spencer is however touring and playing NYC in July.