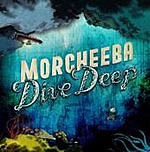 Morcheeba are about to make a ... return with their new album Dive Deep, that is considered by the founding members as an "emotional blueprint" which has restored their faith in music. Dive Deep features guest vocalists ranging from established names such as acclaimed singer-songwriter Judie Tzuke, to relative newcomers Thomas Dybdahl from Norway, rapper Cool Calm Pete, and Manda, a French singer who contacted the Godfreys via Myspace, admitting it was her dream to sing with Morcheeba. Manda's dream of collaborating with Morcheeba continues as she will be joining the brothers on tour along with another album vocalist Bradley Burgess.