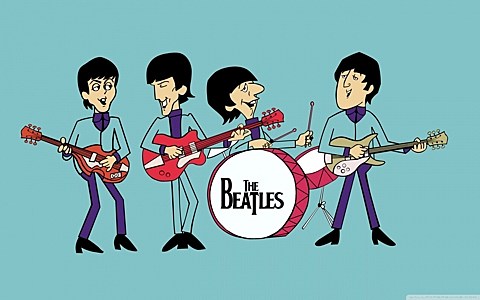 We're only days away from the 50th anniversary of the day The Beatles set foot in America, and as you may know that means tons of events, many of which are right here in NYC. Since we last spoke, more have been added, including that JFK Airport will celebrate the 50th anniversary of the day the band first landed at the airport, February 7. At 11:30 on that day at the TWA Flight Center, located in JFK's Central Terminal Area, adjacent to JetBlue's Terminal 5 (not that Terminal 5 of course), the tribute will take place and include an unveiling of the Beatles historical airport maker and a live band playing the band's hits.

Other events in NYC include "Ladies and Gentlemen ... The Beatles," which runs from February 6 - May 10 at the New York Public Library. The exhibition, created by the GRAMMY Museum, covers the band's 1964-66 period, and will have many pop culture artifacts, instruments, posters, photographs, interviews, and more on display.

NYPL also hosts an interview with Mark Lewisohn, who wrote Tune In: The Beatles: All These Years on February 10 at 6 PM, and a screening of What's Happening! The Beatles in the USA on February 13 at 6 PM.

There will also be NYC Fab 50 tribute concerts, including one at The Apollo on 2/6 with Mary Wilson (of The Supremes), Bettye LaVette, Lloyd Price, Melvin Van Peebles and Gary U.S. Bonds; followed by one with the Spin Doctors, NYC's Williamsburg Salsa Orchestra and School of Rock, and international Beatles tribute bands on 2/7 at Hudson Theatre (145 West 44th St); then a closing concert at Town Hall on 2/8 with Tommy James, Melanie, Marshall Crenshaw, Fred Schneider (of the B-52s), Al Jardine (of The Beach Boys), Gene Cornish (of The Rascals), Greg Hawkes (of The Cars), and many more. There's also a final party at The Bitter End on 2/9. More info and tickets (with proceeds going to Food Bank for New York City) for all four events HERE.

Concert promoter Sid Bernstein, who presented the Beatles' first NYC shows at Carnegie Hall, plus their Shea Stadium shows (and who passed away last year), will be honored with a memorial concert at The Cutting Room on February 12, the 50th anniversary of the Carnegie Hall shows. Tickets for that show are on sale now.

If you missed them, check out the other Beatles' US 50th Anniversary events that we posted last week.

And lastly, Ringo Starr is also touring this year.