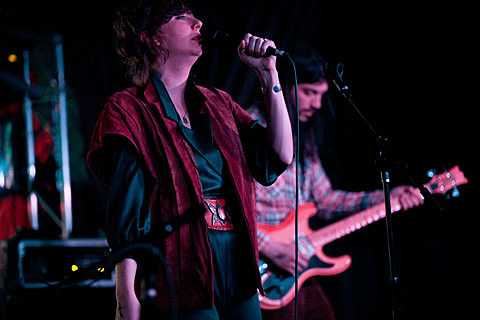 Shopping/entertainment destination Brooklyn Night Bazaar has announced a few more shows to it's upcoming schedule of free musical entertainment. So let's run through them, shall we?

The next night (April 12), they have Canadian band PUP (who just played here a couple weeks ago) for a co-headline show with Hunters, plus Big Ups too, making for a very fun Saturday night.

Canadian sisterly duo Tasseomancy (who we just wrote about) are part of an appealing bill on Saturday, April 26 that is co-headlined by Oberhofer and A Great Big Pile of Leaves, and also features Canon Logic and Mt. Royal. Meanwhile, Amanda X was added to the Total Slacker / Reputante show that happens the night before (Friday, April 25).

We already told you about the Screaming Females release party happening on May 16. The next night (Saturday, May 17) Swearin' and Radiator Hospital will play BKNB with more TBA.

This weekend at the Bazaar, it's Bronze Radio Return, Gem Club, The Suzan, and Alexandra Stewart on Friady (April 4) and then on Saturday (April 5) it's under-appreciated Irish band Ash, plus Run River North, Golden Suits, and Drop Electric.