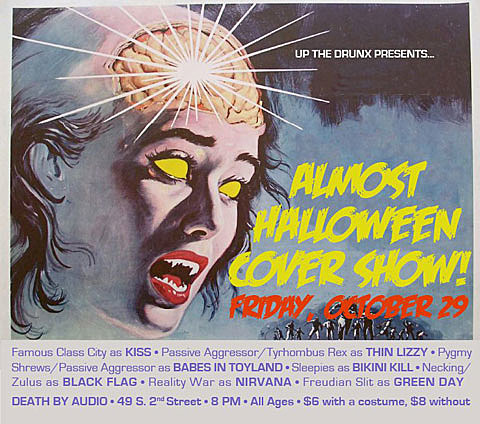 Mr. Brownstone, a Guns n Roses cover band that comes in and out of retirement, is at Brooklyn Bowl on Saturday.

Cassie & Justin from the Babies will be the White Stripes on Sunday - the same (Halloween) day that Robbers on High Street will be ELO at Mercury Lounge where a Weezer cover band will open. Mouth Breather, a Jesus Lizard cover band, plays Fontana's. And at Union Pool:

DAMN! a Halloween tribute to WHAM! (Max & Kev of Pizza Party on EVR)
THE CURE (Warm Ghost)
VIOLENT FEMMES (McDonald's)
ELO (Members of The Mad Scene and The Flaming Fire)
DANZIG/MISFITS (Members of Love as Laughter, Children, and Violent Bullshit)

Past Halloween, another tribute band is coming out of retirement, a very short retirement. Tragedy played their final show in January. The All Metal Tribute to the Bee Gees plays their next show November 12th at Brooklyn Bowl (billed as their "last show ever").

The Fab Faux are performing The White Album in its entirety at Terminal 5 on December 11. Tickets go on sale at noon.

Zoso is playing 'The Ultimate Led Zeppelin Experience' at Music Hall of Williamsburg on January 29th. Tickets go on sale at noon.